The Universal Benefits of Competition 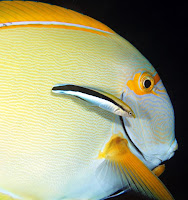 One of the most important reasons why market outcomes dominate government ones is competition: government often rules out competition by law, or subsidizes production in such a way that alternatives are not truly competing. Yet firms that compete for customers minimize costs, maximize efficiencies, and innovate, much more than governmental organizations.

In Anna Dornhaus's lecture I did not mention her wonderful example from the animal world on competition. 'Cleaner fish' get rid of parasites on 'client fish.' The cleaner gets to eat the parasites, the client fish likes having fewer parasites. Sometimes, however, the cleaner fish take a bite out of client fish for some extra protein, and this hurts the client fish.

The equilibrium results are as follows:

That's a nice example of how universal the concept of competition, and incentives in general, is. We are nicer, better, less short-sighted, when we have to compete. Insulate yourself from the market, and you can easily rationalize biting your customers.
Posted by Eric Falkenstein at 9:02 PM

Now we just need a solution for those cases where the cleaner fish can bite in such a way that the client will only feel the pain when it's too late to switch suppliers (eg healthcare and financial services).