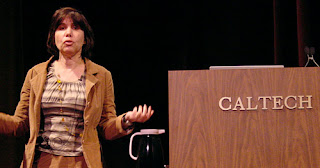 Alison Gopnik studies babies, and finds them active little theorists, academics with no responsibilities and lots of time for inquiry. She titled a paper Explanation as Orgasm, noting our pleasure from explanations is like an orgasm, in that it must have some kind of innate reward to get us to do it. Children need to learn about the causal structure of the world, so there must be something hard wired to get them all to seek theories to explain the world, otherwise it wouldn't be common.

there is a lust of the mind, that, by a preserverance of delight in the continual and indefatibable generation of knowledge, exceeds the short vehemence of carnal pleasure.

I do get a large amount of intrinsic pleasure in learning new theories that I think are true and important. Perhaps my delight in figuring things out is not some appreciation I have developed, like learning to appreciate a Jackson Pollack or Bach cantata, but rather something instinctual, like appreciating landscape paintings or great guitar riffs.

Gopnik does not really mention what this biological payoff might be, but clearly it is not much like the cocktail of brain chemicals released during an orgasm, including norepinephrine, serotonin, oxytocin, vasopressin, nitric oxide, and prolactin. The benefit of 'explanation' is a lot different, but no less physical (and thus the analogy retains). 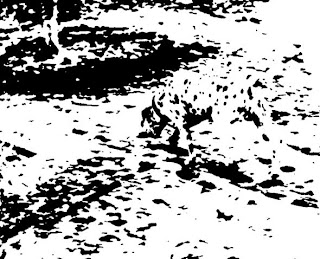 Consider the payoff one gets from an 'aha!' moment, those instances when some pattern is recognized that explains the data. For example, note when you see the dalmatian in the picture here, you get an 'aha!' moment. They have many ways to test for 'aha!' moments, such as asking you what word goes with pine, crab, and sauce (hint: it's a fruit). Researcher have found that 0.3 seconds before the subjects indicated solutions achieved through sudden insight, there was a burst of neural activity of high-frequency (gamma band) activity. Such simplifications of reality, explaining more with less, is intuitively pleasing because it releases a burden on our brains, we now need hold and arrange fewer facts to see the same phenomena.

That's all fine, but it suggests a darker flip side. If we abandon an ideology that currently explains many things in our mind--global warming, Freemason conspiracy--then many facts explained by this old ideology are now free floating, unexplained. Letting those go must be as unpleasant as learning a new theory is pleasant, one is the other in reverse. The assumptions we adopt are largely affected by birth milieu, accidental in some sense and so obviously inferior in many respects relative to what an omniscient being would assume, so we have a lot of baggage.

Say we notice that one of our ideologies (we have more than one, as one might believe in libertarianism and String Theory), is definitively inferior in certain cases, and a better theory exists. In that case, it is costly to change, as you would unleash a flood of bad high-frequency brain waves upon scrambling your neat theoretical web that nicely holds many of your observations together. Thus, you reject the new theory and accept the anomaly in hope that an innocuous solution can be found, like the relativistic adjustments for really small or fast objects in the Newtonian paradigm.

This could explain why science progresses one funeral at a time (ie, thus not political conservatism as orgasm, but the same conservatism that has kept Noam Chomsky and Ron Paul having the same radically opposite beliefs for decades).

Feynman noted that people tend to fool themselves a lot:

The first principle is that you must not fool yourself--and you are the easiest person to fool. So you have to be very careful about that. After you've not fooled yourself, it's easy not to fool other scientists.

We stick to old theories not merely to succeed in our current parochial coalition, but because it is innately unpleasant to replace ideologies that currently seem to explain a lot of facts. Young people have lots of neurons but not many connections, so they don't generate so much cognitive dissonance adopting new theories, as their existing set of theories is pretty limited. Young people can learn a lot because they aren't contradicting much, so it's rather pain free. In contrast, an adult who learns something profound loses some innocence, and has to then rethink deeper assumptions.
Posted by Eric Falkenstein at 3:05 PM

Well, the greatest advantage humans have as a species is their powerful brain so it stands to reason that incentives to achieve insights into how the world works have evolved accordingly and become part of the hard wiring.

Adherence to the scientific method (currently under considerable stress these days) has been the best tool for minimizing and circumventing human handicaps in the quest for objective truths. Also, if humans were immortal, or had typical life spans many times what they actually are (but otherwise had the same mental and physical abilities) I think their inclination to fool themselves (along with a host of other mental drivers) would be a lot different and perhaps this would make them even more powerful learners (or maybe just more lazy!). In other words, the applicable timeline is important: life moves along pretty quickly and self-interest (and it’s expression) adjusts along the way. Perhaps it’s significant that human reasoning ability evolved to something close to it’s present state when human lives were much shorter.

Gopnik actually states that kids are really the R&D for our species. I think she naively thinks they are 'better' than adults, but clearly they have the luxury of forming ideas without having existing ones only because they have caregivers. But still, the new theories are then focused on the kids laying down new connections, not the old ones.

“R&D for our species” implies that kids break a lot of new ground for the species and they don’t. Kids are the R&D for their adult selves. It seems to me that kids (especially early on) spend most of their time learning/forming theories about things that really have (for all practical purposes) only one, well established right answer: fire is hot, things tend to fall down, objects don’t vanish when the lights go out etc. I’m sure the neuron connecting, explanation seeking and theory formation that goes on behind this are all important building blocks for later, more advanced cognitive reasoning but kids aren’t exactly advancing the ball of human understanding here. For whatever reason it's more beneficial to learn these things than to have them hard wired in as instincts like other animals do (to some extent).

Besides, it’s easier to make impressive leaps (from an adult’s point of view) when your baseline is closer to zero. The whole purpose of a kid brain is to become an adult brain and kids do what they do mentally because they have to (if you don’t learn language by a certain age you never will etc.). Human knowledge and capabilities (R&D)are demonstrably expanded by adults, adults we call “kids” and sometimes childhood prodigies whose exceptional mental horsepower and/or rate of development enable them to function as adults in at least some areas.

So we just need adults to recognize and acknowledge the sunk costs of their intellectual expenditures.