Have US Federal Revenues Hit Their Laffer Curve Limit?

I was listening to Jeffrey Hummel's recent talk (see here, scroll down to his picture). He argues the US federal default is inevitable, using the following reasoning. 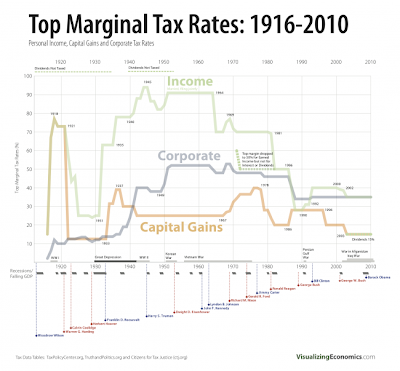 This suggests the 20% barrier is some kind of structural barrier in the system: people adjust their effort and tax avoidance to generate basically the same percentage of GDP over a variety of tax rates.

Here are the projected Federal expenditures from the Congressional Budget Office

Thus, the projected 30% of GDP spending in the pipeline seems impossible to finance. While conceivably we could cut our spending, its likely this will only be cut when deficits are curtailed via an explicit or implicit default.
On the brighter side, it took Rome a good 200 years to totally implode after their peak, and there's the example of Argentina, which while not as relatively prosperous as it was 100 years ago, isn't a horrible place to live.
Posted by Eric Falkenstein at 1:31 PM

I live in Argentina, have for the past 3.5 years. You have to deal with a lot of bullshit and the place is somewhat chaotic; and the inflation has been a cruel joke, and there are probably a bunch of little things I can mention. But it's still pretty nice overall!

Real personal income tax rates have been a lot flatter than that. Deductions decreased (and taxable income increased) as rates declined. I don't think anyone actually forked over 90% of their income above whatever the break point was back in the day.

But shouldn't infaltion be factored into the government's take too?