Dave Cowan and Sam Wildeman at GMO have a new paper, Re-thinking Risk (check here or here if that doesn't work), that makes the argument that the poor performance of high beta stocks makes perfect sense. Their idea is that high beta stocks actually are leverage with a put option, because unlike a levered fund where you can lose 2 times your investment (200%), a beta=2 portfolio can only lose 100%. In their words:

The point here is that the form of leverage offered by high beta is different in an important way from explicit borrowing. Investors should prefer this kind of leverage, and, in an efficiently priced market, they will accept a lower return for it. As we will show, the performance of high beta is not a product of excessive demand, but rather a reasonable and rational consequence of the fact that it provides a convex payoff to the market.

Their analysis highlight the fact that 'risk' has two meanings. One is the risk people intuit, the other the technical metric in financial theory that generates a return premium. The risk that generates a risk premium is solely a function of expected covariance with some risk factor. Convexity just means the average expected risk in the future is nonlinear, but there's still a simple linear function of this expected covariance that should relate to the expected return. Convex payouts in options may seem less risky, and indeed are often sold via the pitch that they have 'limited downside.' If losing 100% is risk reduction for you, your broker probably has you on speed dial.

The key insight in Black-Scholes-Merton wasn't the basic formulation, which was well-known at that time among practitioners like Edward Thorpe, it was rather that one should use the 'risk free rate' to discount future payoffs. This was surprising, and though it was proved later much more simply by Cox and Rubinstein in their binomial pricing model, they figured it out first and deserve their accolades.

Convexity generates option value only because of its effect on expected values, not because of a 'risk premium' in the technical sense. That is, the 'option premium' above the 'intrinsic value' is purely a risk neutral expected value. The convexity in payoffs should show up in the expected returns, which should show in average returns over a large enough sample. As the authors note, high beta stocks under perform historically in the US and internationally, so it is implausible to say this is simple a 'peso problem' of having a small sample.
If a high beta stock is really like a portfolio with leverage plus a put option, the expected return is still a function of its expected beta. This is shown rather nicely by Joshua Coval and Tyler Shumway in their paper 'Expected Option Returns.' 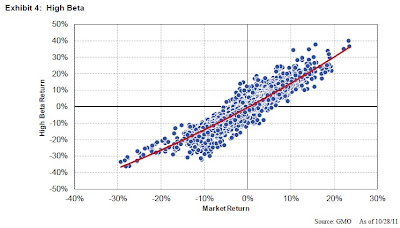 Nevertheless, while it is true that Beta=2 equities can lose only 100% unlike being levered 2 times where you can lose 200%, in practice this convexity is quite small. Above is their empirical estimation of the convexity in high beta equities. While there is a little convexity, it is quite small, not significantly different than zero (ie, it's pretty linear). It's implausible to think this minor amount of curvature is practically important.

The authors then point out that betas for high-beta equities have lower betas in down markets than in up moves. True enough, but this highlights having a good conditional beta forecast that recognizes this. By now everyone should know that in highly volatile times like 2008, stocks tend to decline and correlations increase, compressing the cross-section of beta (lowering high betas and increasing low betas). In practice, you want a bayesian adjustment or shrinkage parameter to your beta estimation that recognizes this (more shrinkage in bull or declining volatility estimation periods).

In sum, I think the authors are confusing the intuitive risk with priced risk. The low return to high beta stocks is still a puzzle to standard theory because these stock returns include the convex payout, and this should show up in the average returns of stocks that implicitly include them. Not only is the convexity slight, high beta equities have lower than average returns historically.
Posted by Eric Falkenstein at 12:07 PM

interesting point. the way I read it, the only source of convexity the authors claim to exist in a portfolio with a beta of 2 comes from the fact that beta on big downside moves is expected to be less than 2, nothing else. the guy who borrowed an amount equal to his capital and invested in beta of 1 will get stopped out at (close to) 50% of current prices, while the one who used the same capital to buy the high beta will still have some money and upside left (probably well below 50%, but still). if I could trust their assumptions, I would prefer the high beta. I don't see where they say that the convexity comes from the fact that maximum loss is twice as big. I can relate that to the idea that "any stock can be thought of as an option", but they don't seem to be making this point.

I concur with B.A.

Saying that a 2x levered investment can lead to a 200% loss is nonsense. You cannot lose more than your initial investment.

Eh, it gets into semantics. But think of it as a futures contract, not a levered ETF. If you take $1 in the SPY as your base, a futures that has a beta of 2 relative to this benchmark, can lose you $2.

It depends how you define capital, as clearly your margin will increase as the futures goes against your.

Hello Eric,Every time I see a really good article I do one of three thing:1.Share it with my relevant friends.2.save it in all of the favorite bookmarking websites.3.Be sure to return to the site where I came accross the post.After reading this article I’m really thinking of doing all 3!

I think the article is pretty interesting, particularly as it relates to the hedge fund return calculation. Thanks for point it out.

I think the authors of the article are just saying that if the returns are asymmetric, the beta calculations are out of whack. And therefore, you can't just take a simple linear relationship between the beta and the market return. You have to compensate for the asymmetry first (they do that by selling calls).

That makes sense to me. Does the standard model work independent of the distribution of the payouts? The concept of standard deviation seems pretty tied to the normal curve.

I think you're saying that if you have a big enough sample size, it will adequately represent the entire payout curve and so the calculation of the beta itself should adjust to compensate (should fall). I have no idea if that's the case or not, or how the big the sample size has to be (particularly timewise) to meet that.

In his graph, the high beta = high returns theory seemed ok during the 90s and started diverging only recently. Maybe it's only the recent conditions that highlight the asymmetry of high beta stocks.

your articles are always interesting; thank you.