The Parable of the Light Bulb 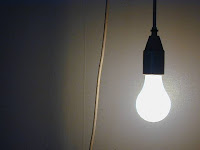 I will always remember an existential depression I had when I was about 12 years old. We were on vacation in our family truckster and I was just thinking to myself for hours looking out the window at the scenery going by. I came to the realization that life was meaningless, and I just felt incredibly depressed for the next couple of hours. While I generally just avoided the issue growing up, eventually I reconciled my nihilism using the standard rationale that we create meaning by finding interesting things to do and doing them well--World of Warcraft, baking, discussing philosophy, parenting. This puts your life into a network of interactions valued by others--perhaps only those in the future--that makes your life part of a story as opposed to a random sequence of events.

There's a danger there, that your activity is actually like using a narcotic, something that over time producers less enjoyment because of its irrelevance to others; no one wants to be the guy who spent his whole life becoming expert in something later found to be a dead end, not valued by anyone. This is a nontrivial problem for academics who receive the weak signal of peer enthusiasm, as fads are just as common in academics as in financial markets, and many times I have heard people working on abstruse theory note that Riemann's geometry might have seemed irrelevant at the time, but a half-century after his death it proved very useful in Einstein's General Theory. Yet most geometries aren't so fortunate. I actually think most academics are doing this, as I doubt women's studies professors, string theorists, or those doing Global Warming research will find their output valued, but any middle aged practitioner has the equivalent of golden handcuffs and can't reject his life's work. It must have been awful to have been a 50 year old Marxist in 1989.

But, perhaps the problem with finding the right game to play well is even harder than I imagine, basically needing a lot of luck. Recently, I Stumbled Upon this interesting riff. Here's an argument that the solution may not be within us:

When, however, it is taken out of the cabinet and plugged in to the socket, all of a sudden it becomes useful; it serves a purpose, and all of the parts and pieces work together harmoniously to serve as a conduit for light. It is now doing what it was designed for, it is performing the job it was built for. This might be the same as what can happen with human beings.

If this is the case, then the whole aspect of "creating" meaning does not work. It would be like the lightbulb taking up yoga or canvas painting in an effort to "create" meaning. While this might work for a little while as a temporary distraction and amusement, the light bulb would not experience permanent relief until it became plugged into the socket, or performed the exact function it was built for.


The question we should all be asking: am I just a closeted yogi lightbulb?
Posted by Eric Falkenstein at 5:14 PM

What you are describing is Aristotle. He argued that each thing has an innate purpose, a "nature," and happiness involves fulfilling that nature.

But the Light Bulb can't know its nature until it is plugged in by a higher consciousness. It can't find it by itself.

Unfortunately, the only discernible "purpose" of a living individual is to survive, reproduce and assist the children and grandchildren. Although a "higher" purpose of "bringing light" into others is a nicer idea.

I think the record shows that the strategy of waiting around for someone to pick you up and screw you in is much less likely to yield a positive payoff than the strategy of picking yourself up and figuring out how to screw somebody else.

Go to law school. Or, if both the prospect of passivity and a positive payoff appeals to you, get a government job.

Aristotle and Ayn Rand,
You are a human being, and your happiness comes from living a productive, thriving human life.

I think this is why I became an engineer. My work is about practical improvements that make people better off. It's hard to not believe that it's relevant or worth doing.

AHW: But why is it meaningful to be 'productive and thriving?' Are you not then just a happy drone? What makes being successful and productive inherently meaningful, other than thinking it so? This has troubled many. My solution is just that feeling the sincere appreciation of others is like the embrace from my daughter, something I just enjoy without any reservation or second thoughts. 'Productive and thriving' implies the appreciation of others.

My son just started walking on his own yesterday and had a huge smile on his face. That was the most purely happy moment I have experienced in at least 20 years.

This is amazing like the previous one..
Thank you for this article..

When using bulb for homes, you must secure the safety. It may create short circuit that may damage not only your home as well as your family. For those unused bulbs, keep it properly away from children because it may create an accident if they would play with it. I found your blog informative one.