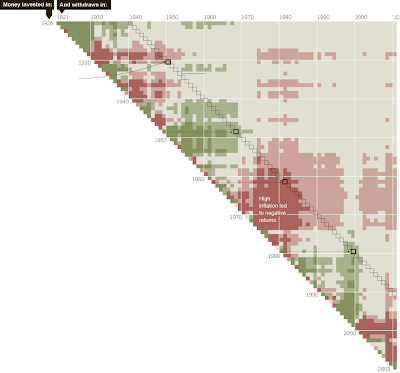 The Sunday NYT has a neat pixel chart, where the blocks are years from 1920 to 2010. Each cross-tab represents the return from the vertical axis to the horizontal, so dots near the diagonal are short-term investments, those towards the right, buy-and-hold.

What it says to me is that the long run is easier to predict than the short run in this sample. Jeremy Siegel suggests these are invariant parameters, yet as Lubos Pastor and Robert Stambaugh point out in their Are Stocks Really Less Volatile in the Long Run?, we have to remember there are only a handful of '20-year' independent samples here, hardly enough to say these are population means. Further, data from the 19th century was often filled with selection biases (see here ), which makes sense when you consider who has the incentive to derive these indices (those selling equities).
Posted by Eric Falkenstein at 9:47 AM

Short term risk is mainly endogenous, fickle investor sentiment. Long term you have to worry about things like war, political revolution, monetary collapse, etc. In the long run cash is risky, maybe even as risky as stocks. But there are very few, if any, long term investors...