Sometimes It Just Takes One Mistake 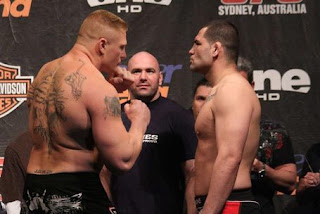 Sports are so compelling because they embody the essence of life: meaningless at some level, but the competition, excellence, and courage are as good a collection of virtues one can observe. The key is that the excellence is refined, a mastery that takes skill and practice at something many others appreciate. I used to wrestle and keep up with college wrestling, but I really like the mixed martial arts as practiced in the UFC. This weekend's UFC had another classic bout, with the huge Brock Lesnar looking invincible, just like Fedor Emelianenko. He's just freaky strong, country strong. Once in a college wrestling match he broke his opponent's pelvic bone in a cradle.

But Cain Velasquez is really talented too, and highlights that in this sport no one is that much better than everyone else. To look at him next to Lesnar, you think, this guy's in trouble, but MMA fighting takes a lot more than strength and speed (though those are necessary and sometimes sufficient). Velasquez withstood Lesnar's initial assault, and then actually took Lesnar down with a nifty high crotch, in a move that didn't seem too flashy. That is, he made it look more like a slip than an actual offensive move. Then, coming from a wrestling background, Lesnar instinctively took a wrestler defense by getting to his base, a big mistake in mixed martial arts where striking and joint locks are in play. This opened him up to devastating strikes to the head that left him dazed. By the time Lesnar stood up he was dizzy, and Velasquez seized on this opportunity and finished him with strikes and a nice knee. Another very strategic match, where a small mistake leads to catastrophic failure.

In contrast, tonight I took my boys to a professional wrestling match, as they find this great fun (and its fun for me to watch them having fun). I find it all rather hokey, obviously scripted, and so lacking any suspense. Strangely, there were a lot of 'retarded' people in attendance (eg, Down's syndrome), so the fan base is truly people with mental ages of around 11.
Posted by Eric Falkenstein at 11:27 PM

Just saw the highlights, but that knee Valesquez caught Lesnar with toward the end was brutal.

What's the average length of the fight when Lesnar wins? I wonder if being that huge is sub-optimal WRT endurance if you can't take an opponent out early.

I saw the Emelianenko fight on Showtime. The UFC president made some snarky comments about Fedor and Strikeforce in regards to that, but I think your observation that there really isn't that much daylight between the champs and the contenders in MMA is correct.

Hmmm, "competition, excellence, and courage".... What about the Greek virtues of "justice, courage, moderation & wisdom"? And the Christian virtue of "forgiveness".