Heart without a Brain 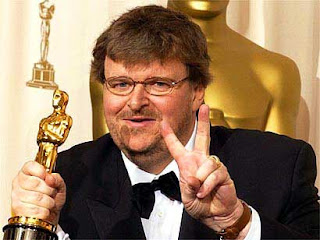 Here's Michael Moore promoting his movie about the 2008 financial crisis, in Capitalism: A Love Story, at an interview with Canada's Q TV:


Q: There are a lot of scenes where people lose their homes to foreclosure...The remedy presented is the banks should forgive these loans, even if they are unpaid.
At what point should an individual be held responsible for paying back the loan?

Moore: At what point should an individual be held responsible for being raped? Are you saying the victim wore too short of a skirt? ...the number one reason people are being thrown out of their home is medical bills...

First, note the really bad analogy. A foreclosure, is not 'like' rape, excepting that 'an unfortunate thing happened'. But to infuse with such an absurd, and vivid, analogy highlights he is more driven by emotion than reason, hoping to short-circuit criticism in the naive way Nazi analogies are generated by young debaters.

While I don't doubt Moore's intentions, he would make life worse for everyone on an absolute scale. The Kantian idea that you judge everything on good intentions is not absurd, after all it's hard to fault someone for ignorance because in many cases ignorance is not a choice, but rather the effect of circumstance. Yet here, Moore is simply wrong on the facts here. Medical bills did not rise appreciably in 2007-08. The only evidence that medical bills causes foreclosure is that among people who will be interviewed after a foreclosure, if you ask them why, their answers are predictably self serving (every bankrupt company CEO thinks he was 'screwed' by his banker).

But still, I imagine many on the left would find that one nice thing about poor places like Gabon and Bangladesh is that there is less economic inequality; if the US were 25% poorer but had no billionaires, it would be preferable. In that case, I guess I just have different preferences than these people.
Posted by Eric Falkenstein at 7:53 AM

More than heart I see hypocrisy. He is against paying mortgages because he thinks it is "bank's money". I wonder if he is so magnanimous with his own money.

"But still, I imagine many on the left would find that one nice thing about poor places like Gabon and Bangladesh is that there is less economic inequality; if the US were 25% poorer but had no billionaires, it would be preferable"

I don't think "many" would think that way at all. They would want the same level of wealth with lower inequality. Can you name one mainstream person, who actually wants everyone to be worse-off so that we have greater inequality?


Sure there is a trade-off, but it is not as clear as "many" on the right think :) There is not much correlation between inequality (at moderate levels) and
economic growth. I am thinking of many socialist and also countries with extreme inequality in Africa or Latin America.

Can you name one mainstream person, who actually wants everyone to be worse-off so that we have greater inequality?

"Well, Charlie, what I've said is that I would look at raising the capital gains tax for purposes of fairness." [even if the result was less revenue]

Additionally, the opposite of the superficial argument you make by choosing Bangladesh and (erroneously) Gabon could be made by choosing Norway. Instead, why do you not discuss the numerous studies that have shown the high correlation between inequality and crime, for example?