What is the Carry Trade?

I recently mentioned the Carry Trade, and it wasn't obvious what i was talking about, so here's a short description. The Carry Trade in currency markets is when you borrow in the currency with the low interest rate, and then invest that in the currency with the higher interest rate. If the exchange rate does not change, this generates a positive return. Uncovered Interest Rate Parity is a theory that connects current to future spot rates. This theory states that you have two ways of investing, which should be equal. First, you can invest in your home country at the riskless rate. So if the US interest rate is 5%, you can make a 5% return in one year, in USD. Alternatively, you can buy, say, Yen, invest at the yen interest rate (each currency has a different risk-free rate), and then convert back to USD when your riskless security matures. For this to be equal, you need something like:

Now the rates of expected return via the two investment paths can differ according to risk, so academics have been trying to explain this pattern via 'risk'. So one can imagine, looking at the yen, or the dollar, or various European currencies in the 1970’s, etc., trying to tie each to some measure of a home currency’s risk factor: consumption, the stock market.

Like high returns to low volatility stocks, it is difficult, but not theoretically impossible, to make sense of the higher currency returns to high interest rate currencies. Robert Hodrick wrote a technical overview of the theory and evidence of currency markets in 1987. He summed up his findings in this paragraph:

We have found a rich set of empirical results... We do not yet have a model of expected returns that fits the data. International finance is no worse off in this respect than more traditional areas of finance.

Hodrick looked at CAPM models, latent variable models, conditional variance models, models that use expenditures on durables, or nondurables and services, Kalman filters. None outperformed the spot rate as a predictor of future currency prices. Hodrick leaves off with the idea that ‘simple models may not work well’. 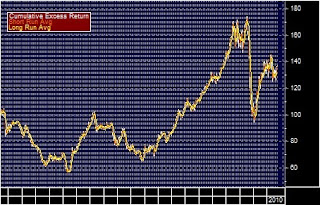 Brunnermeier, Nagel and Pedersen (2008) noted that

Overall, we argue that our findings call for new theoretical macroeconomic models in which risk premia are affected by funding and liquidity constraints, not just shocks to productivity, output, or the utility function.

What they mean is that the carry trade continued to work 30 years after being identified by Farber and Fama, and it has continued as a puzzle because no reasonable risk factor can explain it.
Posted by Eric Falkenstein at 7:43 AM

If hedge funds continue buying the high-interest-rate currency (in order to receive the higher interest rate), then why is is surprising that the currency appreciates in value? Am I totally missing something?

I don't know. I think of the carry trade as one of those classic "picking up pennies in front of a steam roller" strategies.

I remember a buddy and me looking at Icelandic interest rates on before their economy melted down. Looked like a free lunch, but it wasn't.

I think what most measures of risk like std deviation miss is the risk of a dramatic reversal due to a massive revaluation. More often than not these events are not observed in the data but exist only in the imagination of traders. They know they are possible even though they have not happened YET.