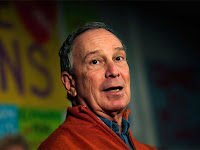 Anyone who works with a Bloomberg terminal, and knows how much they are paying per month, knows Mayor Bloomberg is a very wealthy man. Yet, interestingly, he owns only two pair of 'work' shoes:

Mayor Bloomberg is the rare billionaire who can preach penny-pinching without putting his foot in his mouth.
He's been wearing the same shoes for 10 years.
"The mayor owns only two pairs of work shoes," his spokesman, Stu Loeser, told The Post. "One day he'll wear one, the next the other -- and when they get worn down, he has them resoled."

I agree, in that when you find a good pair of shoes you want to wear them every other day (they need a breather). Indeed, many of my favorite objects are like that: chairs, couches, jeans, t-shirts. It makes you understand why after only a little bit of income (~$70k/year) happiness is uncorrelated with income.
Posted by Eric Falkenstein at 7:57 AM

When I see a giant house and feel a twinge of envy, I remind myself that no matter where I live, I'm going to have one chair I like best no matter what and that's where I'll hang out.

With more money, that one chair might be better but variety doesn't matter much to me.

Sure. Tell that to my f*&$ing girlfriend.