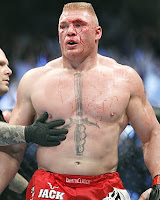 Another excellent Mixed Martial Arts event, with Brock Lesnar defeating Shane Carwin in an epic battle of very large and dangerous men. Carwin was the better striker, and deftly landed an upercut that sent Lesnar to the ground (for some reason, applying g-forces directly to the jaw causes one's brain to momentarily reset). Then, Carwin reigned down shots, but couldn't get a clean enough blow to finish him. In the second period, Carwin again landed some good shots, but then Lesnar took Carwin down with a double leg, and went to work. He went for an arm triangle choke, which is a great move for a wrestler because it plays into their strength in knowing how to torque the neck when going for a pin (note that 3 time NCAA champ Jake Rosholt applied the same move to put Chris Leben to sleep last year).

I know many consider MMA to be rather base because it seems so savage, but its strategy space is large, necessitating skills in boxing, wrestling, and jiu-jitsu. This makes it fun to watch. Several champions have undergraduate degrees in real subjects (Shane Carwin, Rich Franklin, Chuck Liddell), unlike boxing. Recently, the seemingly invincible Fedor Emelianenko was submitted by a jiu-jitsu specialist, highlighting that in a sport with such range, everyone can get beat because no one is best at all three (wrestling, striking, jiu-jitsu), and any one of these skills can be decisive if you don't defend it intelligently. It's a relatively cognitively demanding sport.

Someday the mainstream media will catch on. Sports Illustrated and the New York Times still give it pretty short shrift in their coverage. ESPN's coverage is growing, but they still hold on to boxing which is relatively boring (and, any MMA fighter would dispatch quickly by simply taking him off his feet).

I like amateur wrestling, and many college wrestlers now go directly into MMA rather than train for the Olympics (eg, Johnny Hendricks, Ben Askren, Muhammad Lawal, Cole Conrad). Its very popular among the US military, and Russian ex-President Vladmir Putin likes to show up for Fedor's matches. It sure beats a 1-0 game of soccer.
Posted by Eric Falkenstein at 2:36 PM

Funny you mention this. I didn't see last night's card, but I did see the Strike Force one last week with Fedor, and it actually made me think of your book Finding Alpha. In your videos introducing the book you talk about how certain strategies produce alpha for a certain period of time and then stop working. I was thinking there might be some parallel with MMA styles.

Although the strategy space has always been large, as with investing, some styles come to the fore and some recede. I remember watching the first UFCs when Royce Gracie's Jujitsu caught opponents by surprise. Then Brazilian Jujitsu got incorporated into the mainstream style of MMA. As that happened, the edge of pure Brazilian Jujitsu competitors seemed to decline.

But as you note, the guy who beat Fedor was a pure Jujitsu guy; in fact, he didn't land one strike on Fedor. He fell back and when Fedor went to pounce on him, he caught him with some wicked combination of a choke and an arm bar with his legs. So maybe the wheel has turned, and pure Brazilian Jujitsu can generate 'alpha' again?

My one criticism of MMA is that kicking tends to be underdeveloped in it. Leg kicks are sort of dirty and nearly impossible to defend against; aside from those, you usually just see the occasional roundhouse kick (which for some inexplicable reason, the commenters never seem to describe as such, calling them "body kicks" or "high kicks", etc.). One exception is a fellow who fought on the Strike Force card last week, Cung Le. Le throws great side kicks, spinning back kicks, spinning hook kicks, etc.

Re boxing, at it's best, it's still a compelling sport, and far from boring. For examples, pull up Castillo-Corrales 1, or Gatti-Ward 1.

Wow, can’t believe they gave out two FotN honors.Both guys were so deserving of the outcome and will continue to be earning the money we all spend on future events!

Another thing: I'm no soccer expert, but there have been some exciting games this World Cup. If you haven't been watching, you should give it a shot. The end of the Ghana-Uruguay game was pretty intense.

Rather changes one's view of the mild mannered accountant.

He worked in hte bar next door to our deli in SLO: occasionally helped out late at night if the deli customers got a little too boisterous. Good man to have around really....

I don't watch ultimate, or Boxing because of the violence and ultimately, irreversible damage. I can't contribute to that based on my personal biases.

I want to inform everyone about CreditBlossom.com that is a resource and a tool that assists you in repairing your credit easily, correctly and quickly--for Free. That's why we created CreditBlossom.com. We're here to clear away the clutter and guide you, step-by-step, through the credit repair process.