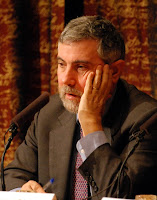 If you believe stimulus is a bad idea, fine; but surely the least one could have expected is that opponents would listen, even a bit, to what proponents were saying.

So, people don't agree with Krugman on something, which means they can't be listening! If they listened, they would hear the truth, come around to his way of thinking, and the world would be as Keynes envisaged in The Economics Possibilities for our Grandchildren: the big problem would be how to spend leisure time.

What ill-tempered Krugman fails to appreciate, is that not many listened to Milton Friedman either, as his career ascended almost step-by-step with an increase in the size of government and the amount of regulation. I don't think many legislators do what Noam Chomsky wants either (anarcho-socialism).

Intellectuals should realize that they are influential only if they help rationalize a zeitgeist, as von Mises noted about Keynes:

Reading Marx, you become struck at how much of what he wrote was about just economics, what happens to wages, profits, production, with lots of little examples. No socialist mentions these arguments or examples anymore because they are so blatantly irrelevant, and rather talk endlessly about alienation, or vague notions like philosophical materialism. Marx was wrong whenever he was specific (eg, the falling rate of profits, business cycles becoming broader across industries, the state whithering aways under communism), but as Marx wrote such obscure long twaddle, despots of all types could simply point to Marx as proving their side was the vanguard of history, and few debaters could on the spot know how to respond to the specious argument taken from Marx's Das Kapital. Marx helped tyrants and naive revolutionaries rationalize what they wanted to do, which is why for many decades Marx was considered the greatest intellectual in history (after the fall of the USSR, this now seems absurd, but that's hindsight).

So, Paul, remember not to take offense, no intellectuals convince people to choose certain policies, rather, they help people rationalize their prejudices. Just break out of your intellectual echo chamber long enough to realize that emphatic reassertion is not argument, and if fiscal stimulus was the no-brainer you thought it was, it would have clearer empirical support.
Posted by Eric Falkenstein at 8:00 AM

That's an interesting take, that economic intellectuals are just froth on the wave. I wonder if it's as true today. There are of course economists in official advisory positions in government, but you could argue, I guess, that they were just appointed because of their ability to rationalize what the pols wanted to do anyway.

I've been trying to follow the stimulus versus austerity debate in the FT this week and I keep wondering why these intellectuals can't unify behind the part of the Venn diagram where there's overlap. Which seems to be, from a layman's perspective, on the need for implementing some policies now to credibly restrain entitlement spending in the future.

One meta point, the more I watch Bloomberg, read economists' blogs, and read the FT, I wonder how to boil this stuff down to something actionable from an individual investor's perspective. The sense I have after digesting all this is that the best asset class right now and for the next couple of years is probably cash.

Joseph Stiglitz was in Australia this week. He made some very complimentary comments on the governments stimulus program, including - "one of the most impressive economic policies I've seen, ever".

I'm not sure if he mentioned why the spending had apparently worked so well in Oz, and not nearly so well almost everywhere else. Perhaps he doesn't know, or perhaps Australia was never going to have a recession anyway, so it was always going to look like it worked.

Stiglitz also claimed the spending was "the right amount", and was "extraordinarily well structured". Again, how the spending program obtained these properties is not made clear. I guess it was what the audience wanted to hear - and the government.

Your right, governments don't go to "the experts" for expert knowledge, they employ them to provide the intellectual support required to justify what they already intend doing.

The Secret of NAM said...

"I'm not sure if he mentioned why the spending had apparently worked so well in Oz, and not nearly so well almost everywhere else. Perhaps he doesn't know, or perhaps Australia was never going to have a recession anyway, so it was always going to look like it worked."

Let's not jump the gun on this. The above post links to an Economist chart showing Australia in an untenable position.

Stiglitz was also in Venezuela last year, praising the economic policies of Chavez (which, lest you don't know, resulted in a 5.8% decline in GDP and inflation of over 30%).