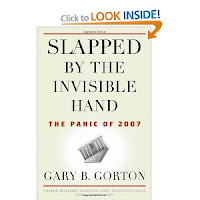 I earlier blogged about Yale economist Gary Gorton's model of the financial crisis here. He put several papers into a new book, Slapped in the Face by the Invisible Hand, which is a quite helpful distillation of several of his papers. Unfortunately, while the book has hardly any math, it still reads pretty much like an academic paper, and there are no conspicuous villains, no gobsmackingly stupid errors. So, it will never be very satisfying to most people, who like to think it was all hubris, a bad formula, greed, meanness, or lack of sufficient regulation.

The basic idea is that the repo market had developed as an independent source of funds, and when some AAA rated mortgaged backed securities started to fall in price, this tainted all AAA securities, especially asset backed paper. AAA securities have a 0.01% default rate, so from a bayesian perspective, when you see a default here the probability is not that one was very unfortunate, but rather, the rating was wrong. Perhaps all ratings are wrong?! Everyone was scrambling to understand how much these previously innocuous securities were worth and found them insanely complicated, so people naturally assumed the root cause could be anything related to the housing-related securities: debt, derivatives, rated securities, complexity, etc. Everything was painted by the same brush, as when one cow tainted with e. coli causes a wholesale destruction of all beef products sold in the US, because one can't be sure. A run on the repo market was a classic bank run, causing the banking system to be insolvent, and lending to sharply contract.

His main evidence that this was a system-wide crisis was that securities backed by autos, credit cards, student loans, and financial companies of varied focus all declined, even though default rates in these other classes were not changing much. A financial crisis is when all finance becomes suspect, created a self-fulling prophesy because the system is always insolvent if there is no confidence in the system. This was best highlighted by Felix Salmon's article blaming the crisis on a specific mathematical formula, copulas, as if this could underlie any portfolio (portfolios invariably are designed with a focus on correlations, and copulas are a way to do this for debt securities).

It's very interesting to think of financial crises, and recessions they cause, this way, as overreactions caused by people not being able to suss out the essence of a crisis in real time. Gorton notes crises occurred regularly in the US (1819, 1837, 1860, 73, 84, 90, 93, 1907, 1914, 1931-33), and every time, people are befuddled. When a a drastic change occurs, such as the change from Free Banking era (1837-62) to the National Banking era, or the creation of the Federal Reserve, after about 10 years they think they have eliminated business cycles. They put in new institutions, but because they don't fully understand the old institution, they fail in totally unappreciated new ways. For example, the Fed contracted the money supply dramatically from 1931-33, something they were oblivious to (interest rates were low, so they thought monetary policy was 'easy'), which Friedman and Schwartz argue turned a recession into a depression.

Gorton notes that fixes are perhaps futile. Indeed, he has some recommendations, one that the government insure 'approved AAA' paper, to help reduce the risk of a panic, but given their role in the reduction of credit underwriting standards (documented on page 66), it is then likely they would have made the essential mistake worse, because one thing government does not do well is admit mistakes, because they don't have to (unfortunately, no government agency has gone bankrupt).

I would suggest that the US financial system was also insolvent in 1975,1981,1990, and that if you had to mark their books to market, (indeed we had new accounting, FAS 157 that tried to apply market prices to accounting during the crisis), this would basically cause massive dislocations. Why not increase bank capital rates from 4-8%, to 20+%? I don't see a consistent risk premium in financial markets, so the cost is rather low. That is, the market does not require a 6% return premium to bank equity, so one does not need that kind of leveraged return.

This book is not a definitive statement on the crisis, but it highlights a necessary and sufficient condition for a financial crisis. As to what caused the initial problem, Gorton highlights housing price declines, noting that the subprime Asset Backed securities assumed prices could only rise or stay flat. As a rule, any collateral should be assumed to have the same expected return, say a couple percent above the risk free rate. Further, its future volatility should assume that the historical moves up reveal potential moves downward (e.g., the 50% upturn suggests a 50% downturn is highly probable). The junk bonds at the center of the 1990 financial crisis, the high tech financing in the 2001 crisis, the lending to oil states in the 1980s, were all associated with excessive leverage based on the idea that collateral would either be stable or rise. It's a common mistake, made in different asset classes each time. As my old mentor Kevin Blakely has said, the problem of excessive leverage keeps showing up with different names: Highly Levered Transactions (HLTs), equity financing (loans backed by firm 'equity'), Alt-A mortgage-backed securities.

Alas, most people will find Gorton a bit too dry, too many references, too much math (there are a handful of algebraic equations). Michael Lewis, in contrast, takes the Gladwellian approach to big problems, which is always well received. Indeed, I have seen him an on TV with several different interviewers discussing his latest book, The Big Short [I expect Russ Roberts at econtalk to interview him and totally agree, notwithstanding the 5 other authors with orthogonal diagnoses he also totally agreed with]. Lewis is considered an expert because he worked on Wall street for 2 years and wrote Liar's Poker, an insider's view of the bluster of rich young men. As anyone who has worked in an industry for a couple decades knows, after only 2 years in the business, the impressions of a kid right out of college, no matter how smart and eloquent the sojourner, are invariably quite naive. Indeed, Lewis's main thesis in Liar's Poker remains a theme in his latest book, the Big Short: finance is mainly an irrelevant Rube's Goldberg device for paying greedy, selfish people too much money. He notes that banks actually were shorting some products they were promoting, as if there was a big conspiracy, ignoring the fact that a market requires sellers, and increasing liquidity is a good thing because if every asset must be held to maturity, costs of financing would be much higher, etc. Further, large financial institutions have many departments, and the fact they have different opinions is about as strange as the fact that America is full of people who disagree on whether tax rates are too high. Ultimately Lewis blames everyone, but especially greedy bankers, and so in a banal sense he is correct.

But Lewis will most assuredly sell more books than Gorton, part of the reason these crises are endogenous.
Posted by Eric Falkenstein at 7:45 PM

Do you have something against Russ Roberts and Econtalk?

no, I listen to a lot of his econtalks...but it is funny that he agrees with 98% of what his guests say

Why not adjust them counter-cyclically? E.g., when trailing four quarters of GDP are averaging 3% annualized, capital rates are set at 10%; when GDP hits 4%, they go up to 12%; when GDP falls to 2%, they down to 8% -- something along those lines?

Repo is only required if you're levered. I would argue the crisis was about leverage, not repo. This time was not different --- same problems, different instruments (call loans in 1907).

Once again - good stuff - particularly liked the ppt. So, um... what is meant exactly by..Further, its future volatility should assume that the historical moves up reveal potential moves downward.
Anyone?

Thoughtful post and still ruminating about it. But weren't car/student/credit card loans, etc., even those rated AAA also at risk of abnormally high default rates, given that the housing market was starting to correct and suddenly a lot of people who previous had "pristine credit" would begin to default on loans because their income was likely tied to real estate? Or is this part of the self-fulfilling prophecy/

It's like Charlie Rose -- if you want to keep the guests coming you have to be nice to them.

Especially if you want people with different points of view. If you proclaim your own and argue with all who differ, it's going to limit who wants to talk to you correspondingly.