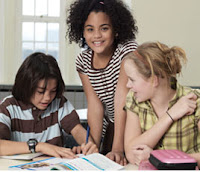 Children learn more rapidly than adults, though they are also very ignorant. In a way, they are idiot savants, good at one kind of thinking (acquisition), poor at another (facts, judgment). A friend of mine had a foreign exchange student from Germany last year, I think she was a junior (ie, about 17). The girl thought of it as a sexual vacation and remarked to the shocked mom that the African American boys were much better in bed than the white boys. The mom was rather horrified by the example set for her own little snowflake; however, I was wondering how to interpret this lapse in judgment. In one scenario, the German exchange student was making stereotypes based on a few people, and this is a bad habit. On the other hand, she might have had statistically valid sample sizes and been inferring correctly. Either way it wasn't a good example for her little American sister.

My daughter is two, so I figure I have a decade or so until I give the 'when a mommy and daddy love each other very, very much...' talk.

My 8 year old son has a different learning quandary. His math homework from our public schools is rather incoherent. He's just getting his addition and subtraction down, and his latest homework had many questions on geometry: identify the isosceles triangle, the right triangle. Before algebra or trig I don't see the point of going over geometry because you really can't use these things, instead, you define things like 'parallelogram', and that's it. He should learn the point of a concept, like a right triangle, is to solve problems. Until he can do more math, these geometrical problems don't help him solve anything, so it's just pointless memorization.

One question showed a square. It then asked, what is the length of a side such that the area is equal to 36. Now I'm sure Terrance Tao could solve this when he was 4, but I'm not holding him to that standard (see the Field Medal winner's test he aced when he was 8 here). This involves reverse engineering a square root, and his knowledge of math tables is sketchy right now. This is why I love Kumon. They drill math mastery systematically using proven methods. They only move forward when a concept (such as subtracting by 4 for single digit numbers) is mastered. Each week there's steady progress, and more complicated concepts are not addressed until students have mastered concepts necessary for their understanding. It's all about overlearning, tracking, and a thoughtful sequential presentation of ideas.

In contrast, the public schools show a bunch of concepts, never long enough for students to really learn them. Their efforts to make math 'relevant' makes it irrelevant, because the best way to teach relevance is to have what you learned last month essential for what you are learning this month, ad infinitum. Instead, we have bizarre little segues to topics like 'lines of symmetry' that are applied to blocks and butterflies, but then forgotten.

My niece is getting a Master's in education and wants to be a teacher for young children. Part of her degree involves designing an experiment to test a hypothesis about learning. One would think, given hundreds of thousands of education Master's students--and their pet ideas for improving teaching--there would be progress in pedagogy out of all this, at least for straightforward subjects like math and reading. Alas, I don't think it is much better than what was taught in the early twentieth century, in spite of probably a million people formally exposed to teaching as a discipline, and studying this systematically, writing theses, journal articles.

We seem in a bad equilibrium. I think Kumon has figured it out, but society has constraints that keep such practices from becoming popular, often based on patronizing ideas about developing creativity of both the teacher and the student. In pandering to parents and teacher's unions, saying "we have a rather rigid process to maximize your kid's learning" is not as popular as saying "tests don't measure anything. We should treat each child as if they were their own special kind of genius." One thing our society is not learning, is how to learn.
Posted by Eric Falkenstein at 8:17 AM

At my daughter's 2nd grade back to school night, the teacher basically admitted that the math system the district uses doesn't actually teach the basics, so we will need to do all the drills at home (like actually memorizing addition and subtraction tables). Every kid's desk has addition tables on the desk, so of course they will look and never memorize in school.
Science is mostly about animals and global warming, as far as I can tell.
Social studies and history appears to be mostly about learning about various minorities.
I am impressed with my daughter's progress in counting money and making change. This will help us count out the $10,000 or so per year of local property taxes, most of which go to fund the unionized government education monopoly that has a death grip on NJ.

Do you happen to have the email address of that foreign exchange student? It sounds to me like she needs a larger sample...

Your friend's statistically minded exchange student had to test a population of only 96 American males to achieve results at a Confidence Level of 95% and Confidence Interval of 10%. She may have tested a representative sample size and been inferring correctly. Other field researchers have published similar results, which reinforces her judgment.

There is lots of good research on what works well in teaching mathematics. Most of it, however, has a hard time making it into the classroom because many adults think they know better. How is it, Mike Tyson-san, that you know "Kumon has it figured out"?

Kumon has shown demonstrable results for my two boys, ages 10 and 8. Now, 'they figured it all out' is an overstatement to be sure, but just because I recognize the fallibility of my beliefs, means I should constantly add the qualifier (eg "but what do I know? I could be wrong"). This is simply annoying. Acknowledging ignorance just means you take seriously alternative viewpoints, though again, there's a reasonableness filter (I don't spend a lot of time reading the details of a new perpetual motion machine inventors).

I agree. And it's good you found something that works for your kids.

A better way to put my point might be that since parental complaints killed "New Math" in the 60's, parents (as a group) have had a much stronger say in the grade school mathematics curriculum. Since everyone wants what they think of as best for their particular kid(s) and anyone can have a say, you get a mess at equilibrium.

BTW, the "relevant" stuff in your kids book helps illustrate this point. Research shows that people do generally better at math in concrete situations (making change, say). So some buyers insist on real-world content. But many others don't care or don't want this material. So, publishers put the real-world material in side bars and stand-alone sections where it is easy to find AND easy to ignore. And since they are planning on some people ignoring this material, they can't make the material actually relevant. It's a floor wax and a dessert topping!

Not sure I can afford Kumon - hopefully I can trick my kids into learning math drills using computer programs that seem to them like games. Actually maybe I don't want to encourage them to learn math, they are already on the nerdy side thanks to genetics...

It's great that quality of sevice is given its due, as measured between bouts of abstinence. But also consider yield, or bang for the buck.