At the beginning of this year Moody's was taking a lot of heat for missing many financial company blow-ups, as well as the whole Mortgage-backed securities area where the grade AAA was clearly misapplied. So they forecast a scenario where speculative grade (BB and B) bond defaults to be higher than any time in history, including the Great Depression! Clearly, they would not be 'too optimistic' twice in a row. 7 months in to this year, default are high, but around where they were in the 1990 and 2001 recessions, not near the 15% default rate anticipated. Default rates (annualized) were at around 10.7% in July, vs. 14.9% expected. 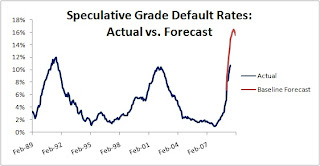 This is why the speculative grade market has rebounded so smartly this year. After a horrendous 2008, 2009 has been a strong year in spite of climbing default because prices anticipated the Moody's doomsday scenario. Total return to the High Yield Index (Merrill's Master II) is 40.0% through 8/28, well above last year's -26% debacle. Spreads between Treasuries and B rated bonds averaged an astronomical 13.1% at the beginning of this year, implying the market anticipated a doomsday scenario much worse than Moody's forecast at that time, or the Great Depression.

It seems likely tat the risk premium actually manifested itself, too. That would be strange because usually there is no risk premium in High Yield bonds, as for many years the spread is about the same as the expected amortized loss rate, about 300 basis points. The High Yield index has done about as well as the Investment grade index since 1987, with significantly higher covariance with the business cycle, volatility, etc.

Spreads are currently about 5.8% for B rated bonds, which is well above historical norms, but way down from earlier this year. The worst-case scenario was baked in in January, default rates have not been as bad as they were expected, and things are now getting back to 'normal' stressed times. 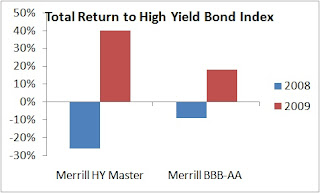 Posted by Eric Falkenstein at 8:24 PM

Eric, thanks for following up on this which you'd posted about earlier. It was courageous for you to call junk bonds underpriced back when (Oct/Nov 08), especially given your research which says to avoid them in favor of investment grade bonds. I'm all for hearing your current opinion on what is overpriced and underpriced !!