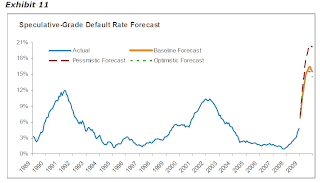 Moody's is getting beat up for not calling the recent crisis and rubber stamping ratings on the disastrous 'mortgage innovations'. I think this criticism is largely overplayed, in that everyone was drinking the Kool-Aid pre-crisis, so their errors are those manifested by academics, regulators, legislators, businessmen, and investors. They didn't set the absurd mortgage lending zeitgeist in motion, merely enabled it with many others. If the current crisis is like World War II, the Rating Agencies would not be Hitler, rather Siemens.

But Moody's feels the heat, so like any good forecaster who missed the turning point, they are sure to error on the other side going forward. As a risk manager, predicting doom and gloom has an obvious advantage, one reason they are so often ignored. People are much more foregiving of an overly pessimistic forecast than an overly optimistic one, so the costs of missing in one direction are clearly skewed towards encouraging the 'Roubini' scenarios. Consider all the lawsuits in the pipeline against the Ratings Agencies, and note the absence of lawsuits for whenever defaults were below average.

As per optimistic forecasts, there are few benefits to mere accuracy. When have you heard of a risk manager getting an extra bonus for predicting low probability events won't happen that subsequently don't? There's good reason for this, because coming up with improbabilities (Black Swans) that won't happen is like paying a computer programmer to find and fix bugs: the supply is infinite. So, risk manager warnings are like the 'check engine' light. When it's on, it usually means the 'check engine' light is broken.

The Moody's forecasting model is not a very good one. I worked closely with someone who built their earlier model back in 1999 and there were ridiculously few observations, because basically you then had two default peaks for post WW2 data: 1970 and 1990. The data is highly serially correlated, implying the number of observations vastly overstates the degrees of freedom in that sample. Thus, it had the challenges of all time series forecasting in that environment. As the Thumper noted in Bambi, "if you can't say something nice, don't say anything at all." Therefore.

But, that was ages ago. They made a new model in 2007 called the the Credit Transition Model. This model uses recent credit transitions, an unemployment rate forecast, and current high yield spreads. The recent credit transitions are clearly negative, and so projecting those forward is sure to generate an increase in default rates. The unemployment rate is going up, but how that correlates with defaults is non trivial (even though it defines the Geithner stess tests, this is still not much to hang a forecast upon). But are High Yield spreads correlated with future default rates? They called an increase that did not happen in 1998. In 1990 and 2000, they did not predict they future increases in defaults, they merely rose with the default rates. To the extent default rates are serially correlated, the high yield spreads did not add much information, as much as people like to highlight how forward looking they are. Clearly, a bond trading well below par is in trouble, and this is useful information for a specific company, but the hypothesis that aggregate high yield spreads predicts future default rates, in the context of historical default rates, is doubtful. Nonetheless, the new model shows an eerily accurate forecast over the past 15 years (from the Moody's Credit Transition Model 2007 document. It's hard to read, but note there are two lines joined like tapeworms in flagrante delicto, one a forecast, one the actual data): 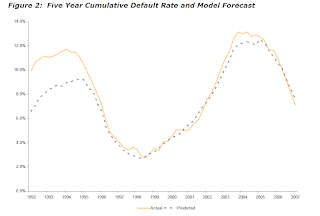 Beware any time series forecast that caught trend changes in the past, because these are invariably fit to that data. Indeed, reading the Moody's Annual Default report from 1999 published in January 2000 before the market melted, we have this little prediction about the future default rates: a decline in the speculative grade default rate, to 'between 6.0% and 4.5%", but "trending downward over the year", with increasing recovery rates. They noted we were moving away from the 'Asian Crisis' of 1998, and so were like all risk managers, oblivious to the next crisis but astutely aware of the most recent one. What happened, of course, was that default rates doubled, peaking in 2001. But that was before the New Credit Transition Model, which as shown above, predicts with an R2 that would shame any back-fitting statistician. Given high credit spreads and the incentives they face, the backtesting and inner workings of that model are largely irrelevant.

So, like those AAA-rated circa 2005 Mortgaged Backed Securities, Moody's is giving the market exactly what it agrees with and wants right now. It is being pessimistic this time so this kind of appeasement is supposed to be better, but in reality it shows the same lack of intellectual courage. I don't blame them, the cost-benefit asymmetry at this point clearly suggests shareholder value is maximized by re-affirming the disaster scenario implicit in high yield spreads, but if i wanted to see what high yield spreads implied about future default rates I would look at high yield spreads, not Moody's.

Fundamentally, no one can predict aggregate time series turning points much better than simple auto-regressive moving average (ARMA) models, so it's pointless to try. Best to focus on what quants can do, pick relative winners and losers. I remember once meeting a new consumer credit risk executive back in the late 1990s, and she told me that instead of predicting relative default rates by obligors, it would be great to be able to avoid the next recession. True, but part of being a professional credit executive is knowing the difference between what you can predict and what you can't. Moody's should simply stop forecasting aggregate default rates. They don't add any value here and merely highlight that for anything many people already have an opinion on, Moody's is not a special lens, but rather a mirror.
Posted by Eric Falkenstein at 5:50 PM

excellent point Eric. This is a problem not just with Moody's but with most of what passes for professional investment research. Analysts and economists are highly influenced by what happened in the past, even if the past has produced a small number of observations.