Barberis and Thaler have a survey chapter in the Handbook of Finance on Behavioral Finance. They note the following financial opportunities caused by behavioral quirks:

I think only half of these are true today, and they may have only been true anecdotally in the past. For example, the 3Com-Palm spinoff was an arbitrage, and I personally know people who arbitraged it. But it does not happen often enough to be interesting. The predictability of the aggregate dividend price ratio uses a 4 year horizon, so how many 4 year horizons do we have in the US? About 20 (80 years divided by 4). That's hardly enough to draw strong conclusions. The index-add/delete strategy was over years ago. Is it really that strange to note that there are many ways to make money if you could go backtward in time?

Strangely, they list the momentum effect of Jegadeesh and Titman and also their 'overreaction' effect, even though these are contradictory. Further, no one has updated their 3 year mean reversion result. If you think contradictory empirical results are true, and no one publishes 3 year mean reversion follow-ups, chances are you did make a technical mistake (in their case, rebalancing daily returns for low-price stocks).

Value, size, momentum, and equity issuance can add value to a strategy, but I don't see how behavioral economics helps you exploit this. But my bottom line is that the rational market school tells you to be skeptical, to check things again and again. Behavioralism lends itself to seeing too many anomalies that are not, or no longer, there. The batting average of someone jumping into these strategies would be less than 50%. Many have a short time frame, so one taking advantage would have to be a full time short term trader to capture these, and you would have been let go long ago if these were pillars of your strategy. 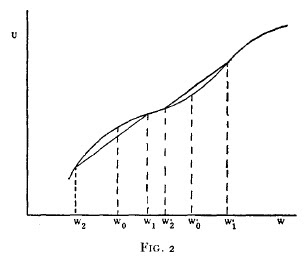 The article highlights how Kahneman and Tversky's prospect theory has allowed people to formalize this approach. Above is a utility graph from Harry Markowitz back in a 1952 JPE article, who was commenting on Milton Friedman and Savage's analysis in this same vein. It has the essence of prospect theory: risk loving for losses, risk aversion for gains, for some arbitrary wealth point. The profession dropped this thread because it was too rich: allowing people to be risk averse or loving, ignoring or overweighting small probability events, is not a useful insight. I don't know how many times I hear intellectual dilettantes note how Khaneman's work is really exciting, which is odd given how old the double inflected utility function is. 50 years is a long time; it was not discovered when Kahneman won the Nobel prize in 2002.
Posted by Eric Falkenstein at 4:33 PM

How could one falsify Friedman-Savage?

Is there any observation that would falsify it?

I guess only an observation that the same person was always risk preferring or risk averse, at every scale, right?

You seem to have misread an article once again. 1) Those are not all 'financial opportunities caused by behavioral quirks', they are examples of limits of arbitrage. They are illustrating idea wrong price does not imply arbitrage...

2) Momentum and Over-reaction do not contradict each other. One is a 6 month the other is an 18+ month phenomenon. Perhaps if you had actually read the article you woudl have come across:

"Comparing this result to De Bondt and Thaler’s (1985) study of prior winners and losers illustrates the crucial role played by the length of the prior ranking period. In one
case, prior winners continue to win; in the other, they perform poorly. 25 25 In fact, De Bondt and Thaler (1985) also report that one-year big winners outperform one-year big losers over the following year, but do not make much of this finding."

3) Beh finance is not necessarily about finding exploitable opportunities, but explain well known cross-sectional/ times series stylized facts, like the predictability of the BM ratio. But there are funds out there that actively exploit inv biases:
http://www.fullerthaler.com/

I disagree. The limits of arbitrage says that capital constraints will prevent arbitrageurs from eliminating these biases. But these anomalies should still allow one to earn a Sharpe ratio (or information ratio) premium by targeting these strategies.

As per momentum, In Jegadeesh and Titman's 2001 review of their finding, Figure 3 shows that one generates positive returns when forming a strategy based on the past 12 month returns for up to 48 months. For this to be consistent with their results, the returns from months 36 to 13 months ago must have large effects over the next 36 months, which is implausible.

Conrad and Kaul (1993 JoF) showed that DeBondt and Thaler's result was primarily due to rebalancing daily returns. The bottom line is if you look at firms that are tradeable, that do not have biases from large bid-ask spreads, there is no overreaction effect. Their have been no follow ups on this finding. Lack of replication is the greatest refutation.

1) That is the whole point! Just because prices are wrong does not mean that you can create trading strategies with high Sharpes. no free lunch does not imply correct prices... with 3 com and other no where do they say that these were 'behavioral quirks' from which you could make money

Btw, there is such a thing as a long term 13-60 month reversal factor:

And yes it still holds...

You are confusing the absence of arbitrage with thought that a Sharpe must be equal to the market sharpe (or Information Ratio=0). These findings are tested in part by their abnormal Sharpes (or information ratios).

I can tell you now that pair trading is still well and alive. You only need a simple formula to find trades.

Let's say the alternatives are

K&T tells us that c) is the case, and that's worth knowing, and it is informative.

Thanks for the thought-provoking article. Although I don't reach the same conclusion as I think you're implying, I do share your concern about the ad hoc nature of many behavioural results.