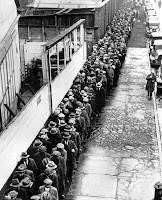 In various debates, the FreeMarketer eventually faces the question "If you don't like Obama's plan, what are you going to do?" The cowed quasi-libertarian then notes her affinity for increases to unemployment insurance, because it seems rather non controversial.

Unfortunately, it is not obvious unemployment insurance is a good thing, and the question reflects two flawed assumptions. First, that attempting to help generally helps. Second, that the situation will not improve without top down policies from Washington. Even Marx stated we should not judge policies based on their intentions, and the batting average for government relief programs is well below the Mendoza line. As per the situation not improving, since the Industrial Revolution began that has been the case. Japan's lost decade, meanwhile, was rife with Keynesian stimulus packages, and they now have trains going everywhere to prove it.

In 2008, unemployment insurance duration was increased 50%, from 26 weeks to 39 weeks. Now, Obama wants to expand state unemployment benefits to part-time workers and others who where previously ineligible to receive the funding, increase the benefits, and increase their duration further.

One iron-clad rule of economics is that whenever you subsidize something you get more of it, so increasing unemployment benefits increases the amount of unemployment. There really is not another side to this, as in the more well-known minimum wage debate.

Everything has costs and benefits. The benefits of increasing unemployment insurance is the increased income of those getting more benefits, and--though this is highly cynical--that those supporting such transfers win status or votes by signaling their compassion through their willingness to support redistribution (it is easy to win votes when a disproportionate amount of the wealth comes from a minority). The costs are delaying the millions of individual transitions needed in the economy, because recessions basically inform us that we need fewer people in some fields and companies and more in others. What should the unemployed do next? I don't know, and people in Washington don't know either, because it depends on the specific skills of those diverse unemployed individuals and what the market is paying for those skills, data that is not available to our politburo. Only individuals are in the best position to solve this problem, and giving them cash may actually not be in their best interest because it just delays inevitable hard choices.
Posted by Eric Falkenstein at 11:32 AM

you forget to include in your cost/benefit analysis the effect of unemployment insurance as an anti-cyclic cushion on aggregate personal expenditure.

I would intuitively agree with you, but there is some research that the reason unemployment insurance increases unemployment is because people are able to undertake more comprehensive job search. See: http://tbm.thebigmoney.com/articles/-undercover-economist/2008/12/15/dole-not-doleful

"He did this by measuring the probability is measured as a ratio of newly employed workers at the end of the week to those unemployed at the beginning of the week."

Just to add to previous comments and along your thought process on Stress Tests, the issue could be more complicated then simply measuring a ratio. For example there may be a correlation between rising benefits and deeper recessions, i.e. benefits go up because it is harder to find a job.

The data in question would need to be thoroughly researched for its assumptions.

The costs are delaying the millions of individual transitions needed in the economy, because recessions basically inform us that we need fewer people in some fields and companies and more in others.

Yeah, as jsalvati pointed out, your cost-benefit analysis assumes that a faster transition is necessarily a better transition. I doubt that this is something you've personally found to be the case in your own career: a job you find in one week is probably not as good a match as one you take 6 months to find.

The study argues that UI keeps people from taking jobs and you guys are saying that's OK because people might end up taking worse jobs than if they waited.

Why not take a lesser job and keep looking? Why should taxpayers subsidize & encourage people's pickiness?

Because of efficient allocation of human capital. Do you want a medical doctor or scientist sweeping floors or in a lab discovering the cure for cancer?

I want a medical doctor or scientist sweeping floors until he kind find a lab to hire him to discover the cure for cancer. I don't want him farting around on the internet while on the dole.

I recently came across your blog and have been reading along. Nice blog. I will keep visiting this blog very often. I want to share news about best insurance Agency which Provides exceptional service with personal and business insurance throughout North and Central New Jersey, since 1988. As an active member of the Independent Insurance Agents & Brokers of America, we match our customers to the company that is best for our clients.