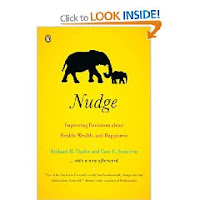 Cass Sunstein and Richard Thaler wrote Nudge, which argues a seemingly reasonable amount of paternalism can make the world a better place. The main example is changing default options, because most people choose the default option, and so if the default option is to invest 6% in the retirement account, in an index fund, that will probably be the modal choice. As saving for retirement, and index funds, are good iddeas, why not make that the default? Who could be against that?

Well, while that particular default option is not a problem, if you give large institutions power to nudge in various ways they have the power to do a lot of damage. Take housing. In John Campbell's 2006 American Finance Association Presidential Address, he examines household financial choices, and notes that many households do not refinance when rates go down, which is bad for them. Thus he makes the seemingly innocuous policy proposition:

In mortgage markets, the U.S. government plays a major role through GNMA and its sponsorship of FNMA and FHLMC. The ability of these agencies to issue low-cost debt has likely reduced the cost of the mortgages they hold. The agencies have traditionally favored nominal ﬁxed- rate mortgages, and it is plausible that they could encourage the use of mortgages with inﬂation adjustment or automatic reﬁnancing feature.
...
Finally, recent research in behavioral ﬁnance ﬁnds that default options–standard choices that households believe to be recommended by authoritative bodies–have a powerful eﬀect on household behavior. The mortgage policies of GNMA, FNMA, and FHLMC may inﬂuence house-hold mortgage decisions through this channel as well as by driving down the cost of standard mortgage contracts.

In the context of his talk, he is clearly arguing a nudge policy by the influential, government-backed housing agencies. They are there, setting precedents for this market, so why not add the good ones Campbell sees are obvious?

Well, many other people thought of this first, and so GNMA and the rest were leading the charge in our subprime debacle using this same logic. Under the pretext of increasing home ownership--especially traditionally under served minorities--they got several large institutions, including but not limited to GNMA, FNMA and FHLMC, to nudge policy towards no income check, low or zero down payments. This was done in innumerable ways (the Fed and OCC approving mergers), as one would expect when billions of dollars are at issue. It's good policy, so why not? The historical default rates on residential mortgages was near zero for so long, mortgage risk was synonymous with 'prepayment risk' until 2006, as default rates were never large so off the radar scope.

If you give government-enmeshed institutions the power--indeed the obligation--to nudge people in view of some greater good (eg, more savings, owning a home), it will have a tendency to become co-opted by people using some principle as a pretext for less salutary objectives. I think the Nudge crowd needs to better appreciate that not everyone is as objective as an academic writing about a handful of good ideas that have been vetted for decades among his colleagues of diverse political affiliations (eg, the default choice on employee investment plans). There are lots of 'root causes' that can be addressed by a large institution, so the list of potential disastrous conflations of the public good with self-interested hucksters is impossible to enumerate.

If you give some institution great power to nudge, it has great power, and power is always corrupted.
Posted by Eric Falkenstein at 1:14 PM

So, your position is essentially anarchistic? It would seem that this 'nudging' is the intentional restructuring of society, and it is unclear how this is done without the use of some kind of 'power.' The corruption you speak of should be able to present itself just as damagingly in the hands of any agent, not just 'greatly powerful' institutions.

"nudge", ha ha. the more power we give the state, the more clear it will be that the "big government" elephant in the picture is not back there to nudge, but to climb aboard and F the taxpaying, saving, investing, responsible members of society over.