In a seminal amicus curiae to the Kansas City Council in their Intelligent Design debate, along with introducing the Flying Spaghetti Monster to ethnocentric atheists, Billy Henderson introduced the famous 'pirate effect', which showed conclusively that the number of pirates is inversely related to mean global temperature: hotter earth, fewer pirates.

The recent pirate attacks, such as the takeover of a $100MM supertanker well off the coast of Kenya, should therefore come as no surprise. As shown below in a chart of monthly satellite recordings from 2003-8, world temperatures have fallen drastically in the past year. 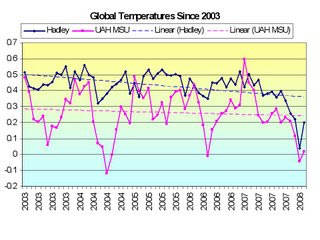 As sure as night follows the day, pirate attacks increased sharply. 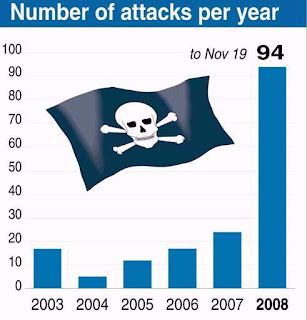 It would be a mistake in logical inference of the first order, however, to blame 'global cooling' per se, because we all know that global cooling is a direct consequence of global warming, via interactions implied by climate models.
Posted by Eric Falkenstein at 8:35 AM

The graph above shows that when pirates reach 35,000, global temperature descends to 14.25 Celsius. When pirates multiply to 45,000 there is a mass effect and temperature ascends to 14.45 Celsius. I wonder if census data is unreliable and if unbaptised or lapsed pirates did register their religion as "pirate".