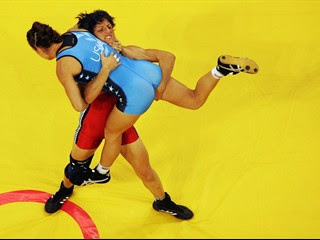 I watch a lot of amateur wrestling, coaching my kids and all, and there's always a handful of girls in these events in grade school. Usually, they are the sisters of wrestling brothers, and the dad was a wrestler. Some are really good, but then puberty hits, and the boys separate, and there is perhaps one female wrestler among every 20 teams.

While I appreciate their effort, one must recognize it is a very unpopular female sport. So when looking for wrestling, I was surprised to see so much women's wrestling. I guess if I want my daughter to make the Olympics, this is probably one of the easier paths, just because there are so few competitors.

On the other hand, there are tons of cheerleaders, and to be a cheerleader at the college level means you bested many many other girls. That should be a varsity sport. Sure, it's not competitive like football, but it is competitive nonetheless, and given the interest of the girls, I think saying you were a cheerleader at a division 1 school is more impressive than saying you played softball or lacrosse. Plus, it would alleviate a lot of Title IX problems that are decimating wrestling programs in college.
Posted by Eric Falkenstein at 10:20 PM

I completely disagree. I prefer that my daughter compete in a sport where she (almost always) know why she won or she lost and where her physical skill or infirmity is central to the competition. The important lessons of sports are easily available.

Central to the competition of cheerleading and gymnastics are some non-competitor making haphazard judgemnts about "elegance" "posture" "smiling" and other silly notions. teh connection between your effort in practice and your success is more distant.