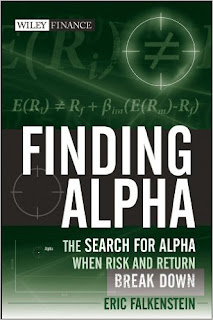 My book The Missing Risk Premium is a steal at only $15, but my first book, Finding Alpha, is a $65, which is a bit much for anyone not expensing their books. Finding Alpha goes over why the current asset pricing model fails, with lots of evidence, explains why economists still like it, and then in chapters 10-13 shows concrete examples of how investors have actually found alpha.

The risk begets return theory is 100 degrees wrong: usually it generates a wrong sign, but often no correlation. When it does work it's like when the CAPM appeared to work in the 1970s, an omitted variables problem (ie, size effect & bias).

The fact that it should work but doesn't implies there's a something really rotten in economics, because it's not like you can add a skew preference and fix this (this is because if the skew preference has a sizeable effect, investors are not globally risk averse, which then turns everything upside down).  There's plenty of wrong stuff people learn in economics or college in general, but most such errors are clearly based on some left-right ideology, and this is not the case here.

You can download the individual chapters in pdf form here...

Posted by Eric Falkenstein at 5:22 PM

Why only 100 degrees, not 180? ;)
In fact I have downloaded your book from somethere, sorry, it is much easier than get it fast legal in my location.
Thank you very much. You are very interesting individual, I like the way you thought about things, so even it is extremally hard for me to read native Enlish book, like 10 pages per day as fastests, I will finish it all :)
thank you very much!