Recently the CBO issued its annual budget projection, and it's pretty benign for the next decade, then climbs at a pretty measured pace. 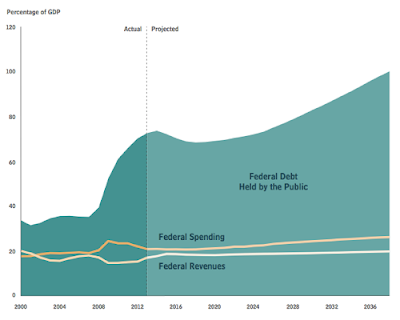 Yet, note that in the last recession our debt relative to GDP doubled.  Given that economists still don't have a good model for predicting business cycles let alone avoiding recessions, we can expect more of them. I think the odds that we elect a modern-day Calvin Coolidge next term are much smaller than the odds the deficit will increase dramatically when the next recession hits.

Consider that in 2007, before anyone saw any hint of the 2008 crisis, the debt was actually projected to fall, but we know how that turned out (black are actual historicals).  That is, they never anticipate recessions, though we all know they haven't been abolished.  I pulled these numbers out of the 2007 'wayback machine' which is a great way to hold large institutions accountable, because for some reason the CBO doesn't keep their historical forecasts on their current site (maybe the NSA can get Google to scrape them away?).  Liberals who happen to be economists  (eg, Brad DeLong) think the latest objective projections prove we have no budget worries.  I guess some people really do think This Time It's Different.

Posted by Eric Falkenstein at 7:42 PM

I think that every government wants to make as much public debt as possible for a very simple and obvious reason. Imagine you get handed an open ended credit card and someone else is paying -- you get told, "Don't go too nuts" but from there it's just a question of whether anyone is looking.

So during a recession, governments know they can get away with it. Doesn't matter if they believe in Keynesian stimulus or not, they can pretend to believe in it and have plausible deniability later. So the correct frame of mind to approach the problem is that governments are always on the lookout for excuses to go into debt in a politically acceptable way.

From that point of view, who cares if governments can predict recessions? They will find an excuse, one way or another.

This article is mind blowing. When I read this article, I enjoyed.

Great post. Your blog is one of the most thoughtful and intelligent on the internet. It is always such a joke reading government budget projections into the future. Scott Sumner has done a good job over at his blog pointing out that the Federal Reserve's unemployment projections keep failing and get revised up every single time they meet. Both the government and the Fed keep saying that the recovery is right around the corner when the only sign they can really point to as a recovery is a lower unemployment rate that turns out to be entirely due to people leaving the workforce.