Jon Vol sent me a little email saying he has a blog post on Taleb, and that it got picked up by a Taleb fansite, where at the bottom it is classified as "Filed Haters || Tagged Falkenstein." I'm not just a Hater, but rather, a type that can be applied to others! I wonder what our distinguishing characteristic is in their eyes? 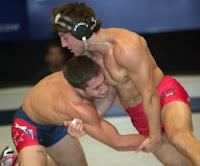 Now that wrestling is trying to get back into the Olympics, they are considering getting rid of singlets! I'd say, it's about time. Singlets simply aren't cool, and if high school kids suited up like cage-fighters I think the sport would be more popular.

******************************************
Heritage's dismissal of Jason Richwine is pretty rich indeed. To recap, he coauthored a study critical of immigration, basically saying that the new immigrants from Mexico would receive more benefits than generate in taxes. Someone looked up his 2009 dissertation, and it had the racy title 'IQ and Immigration Policy.'

It's truly a taboo topic, as demonstrated by his Harvard thesis adviser and famous labor economist George Borjas saying 'I have never worked on anything even remotely related to IQ, so don’t really know what to think about the relation between IQ, immigration, etc.' The NLS panel data that Borjas studies all the time has an IQ proxy (AFQT) in there that is highly powerful in regressions, and he has to know this. He also knows that the subject is not good for one's career, so I understand why he has trained his mind to not think about it, but it's surely an elephant in the room.

Interestingly, Edward Miller writes a lot about race and IQ, which is probably why he spent his career in an academic backwater. His seminal 1977 piece Risk, Uncertain and Difference of Opinion was really the first paper giving a theory as to why risk and return are inversely correlated, and was the first person to state in a journal one should invest in low beta/volatility stocks for this reason.

If you can read Dutch, there's a new review of my book The Missing Risk Premium out there in a CFA magazine. I can copy, paste into a translator, and get a broken English translation that is good enough.

Posted by Eric Falkenstein at 8:54 PM

Wrestling is a great (especially high school) sport: it focuses on the individual, it’s very demanding yet relatively safe, it teaches great lifetime skills, it’s cheap and it often develops/brings out great athleticism in kids for whom more popular team sports aren’t a good fit.

But I’ve never been a big fan of the singlet either. Winning a big match in front of a roaring crowd (we used to call our wrestling room the “The Thunder Dome”) is about as good as it gets in sports as far as I’m concerned…but getting your ass beat in front of the whole school -while wearing a girls bathing suit- can be a pretty humbling experience when you’re 15. Going “shirtless” may just be the simple tweak that reinvigorates the sport where other efforts have fallen far short.

You could probably kill several birds with ones stone by demanding strict, Title-9 equality along these lines too.

eric, you've got to give it to taleb though, he's the only one to take the establishment head-on. and he's got the chops to do it too.

the rest of you are hiding in complacency (so am I, but at least I don't have the chops), cause you can't fight the borg, so why try?

so quixotic, yes, but worthy of respect nevertheless.