If you remember your Corporate Finance, returns should rise (on average) with beta, because otherwise you can form a levered position generating a greater return without more risk. Arbitrage Pricing Theory developed by Stephen Ross was based on the idea arbitrage and totally consistent with the Capital Asset Pricing Model because it was simply the special case where one is arbitraging a single 'market' factor. A recent SSRN paper, Capitalizing on the Greatest Anomaly in Finance with Mutual Funds by David Nanigian.  Here's the Average return by beta quintile for US mutual funds, 1990-2012 (Figure 2--I added the red to see his points better: 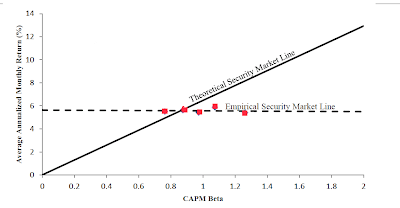 As the author points out, there's an arbitrage here in Sharpe space, because you can generate the same beta and/or volatility by levering up a low beta mutual fund, and then generate another 2.5% return here. But, the best way to play this is less indirect via low volatility funds, because most players in that space have generated an even larger arbitrage opportunity in risk-return space. The key is beta is clearly not priced within equity markets, but it should be, so in the meantime anyone who doesn't have a really good reason to believe they have alpha should invest in a low volatility fund
Posted by Eric Falkenstein at 8:48 PM

Has no bearing on the merits of the author's work, but as a point of information "The American College" isn't the institution in Washington but rather an organization in Bryn Mawr PA that, per its website, "has helped more than 200,000 financial services professionals accelerate their careers.".. FWIW I spend a fair amount of time in Bryn Mawr, and had never heard of it before.

Well, the bullish argument would be that all those new products coming onstream will support the staples, utils and healths for the forseeable.. they'll all have to own them.

I am hoping all the new interest in low vol. funds and ETFs will cause a revaluation upwards of these stocks, which will benefit those of us who started listening to Falken years ago. As It is I am very happy I found this site and read Falken's books.