We take for granted many intuitions, but it's important to remember what intuitions are truly universal, and which are the function of explicit training. For example, speech is hard-wired into our brains, and children exposed to people talking will naturally learn to talk. In contrast, kids won't learn to write or read without years of instruction. Empathy and appreciating motive are innate (mirror neurons), but understanding that evil is usually the result of ignorance, is not. 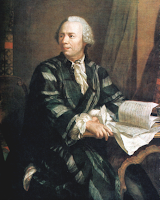 Thus, I found it interesting while reading Stigler's History of Statistics, in the section on Euler and Mayer. Euler is probably one of the smartest men to have ever lived, and Wikipedia has a list of many important equations, numbers, and theories named after him. Around 1745 he tried to explain why it appeared that the motion of Jupiter was accelrerating while Saturn was retarding. This was problematic because it seemed to imply Saturn would fly off into the galaxy and Jupiter would crash into the Sun. His solution involved looking at 75 observations of data for 8 parameters in his formula. He basically tried to solve for them exactly, as if the data were all measured perfectly, using substitutions when various parameters would cancel out, but was only able to then pare the set of equations down to six inconsistent linear equations and two unknowns. He found other such solutions with more equations than unknowns, and admitted defeat.

Johann Tabias Mayer, meanwhile, was a cartographer and practical astronomer. In 1750, he took 27 inconsistent equations in thre unkowns and combined them into three equations and three unknowns. Mayer assumed that one could, and should, aggregate the equations,. That is, as a practical astronomer he had previously averaged sets of equations in order to find the 'true' parameters. He correctly intuited that errors canceled out, though he incorrectly thought the error was inversely related to the number of observations, when in fact it is inversely proportional to the square root of the number of observations. Mayer's experimental experience gave him the intuition to believe in the law of large numbers

Euler looked at the problem like a mathematician, and instead intuited that any errors would only compound via aggregation. This makes sense because often mathematicians think that if the error is +/- 2 units, having 4 observations would cause the sum to error by +/- 8 units. Worse!

I think these are really neat because while it's trivial to think that rubes don't understand the odds of winning the lottery or that the odds of a 'head' after 5 'heads' is still 0.5, that's something you can attribute to stupidity. Yet even geniuses don't 'get' certain things that seem like pure logic, but really require a non-intuitive way of looking at things. It's like the story of Paulos Erdos not understanding the Monte Hall problem.
Posted by Eric Falkenstein at 8:45 PM

Our desire as humans to build structure and rule to the world around often puts us in a position of having to choose between the reality and our model that do not properly model reality. We often choose our beloved models. Pigeons have no such models to fall in love with. That is why the do better at the MHD than us.
http://blogs.discovermagazine.com/notrocketscience/2010/04/02/pigeons-outperform-humans-at-the-monty-hall-dilemma/

I suspect the same argument should be made in the opposite direction: that mathematical thinking is unnatural.

And I mean the "opposite" argument should be made at the same time of course, because to cast it as a simple dichotomy would itself be problematic :)

To throw another anecdote on your pile, I can't count the number of physicists (mostly complexologists with a lot of statistical training) who have admonished me in utter disbelief when I've said I've gone to the casino and played the slot machines. Because of course it's obvious, given the odds, that I could not have won any money doing that. Boy, I had egg on my face as I paid for their expensive drinks, my airline ticket, hotel room, entire stay &c.

I doubt whether a deep and detailed training in statistics and probability theory gives one any sense of the world "as it really is" any more than a deep and detailed training in discrete mathematics or calculus. I often wish more folks in science, mathematics and engineering had at least a bit of exposure to modern Pragmatism, or at least Rorty's basic description of Ironism and (whether they "believe" it or not) what it might mean at the border between their lives and those of others.

But I often wish for a lot of things, and here we are.