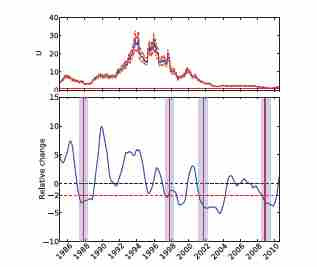 A bunch of physicists (Harmon, de Aguiar, Chinellato, Braha, Epstein, Bar-Yam) have an intriguing paper about cascades. They call it 'mimicry', but Ivo Welch really mined this field for a while, and while I think he gave it a good try, it didn't yield much. We know that in bubbles there's a lot of people doing what everyone else is doing on the way up and down. Correlations go up. It's interesting to model this as a rational outcome, as a situation in which every subsequent actor, based on the observations of others, makes the same choice independent of his private signal. In an information cascades everyone is individually acting rationally. Even if all participants as a collective have overwhelming information in favor of the correct action, each and every participant may take the wrong action. Even though a million people may have chosen one action, seemingly little information can induce the next million people to choose the opposite action. Fragility is an integral component of the Informational cascades theory.

The bottom line is that a theory should be able to not merely explain the past, that's hindsight, not science. It should predict. And these models haven't been successful here, so that thread has kind of dried up.

So, here's some physicists trying again. They generate the simple time series graph above. The top graph is a measure of dispersion, so a high number means that stocks are pretty uncorrelated, the lower number means stocks are highly correlated. They find that 1) stocks have become a lot more correlated over the past 15 years and 2) the change in this metric over the past year is a significant predictor of future crises. The bottom time series shows that prior to big moves like the 1987 crash, LTCM crash, 2001 crash, and 2008 crash, this measure moved relatively downward prior to them all. It's not perfect, but I like the unpretentious way they framed the problem and presented their results. It's not overfit.
Posted by Eric Falkenstein at 9:53 PM

Alot of people think we are doomed, but there are still great ways to make money. Even while the economy is collapsing around us.

I subscribe to the guy from australia and his FFT economic newsletter at http://www.forecastfortomorrow.com that guy has called many big events before they have happend, including the stock market crash in 2008 and the current financial collapse of the US. (currently happening) I found him from a friend last year, and he has some important work.

His oil calls are insane, and I have been making good money with them. He is well worth a look, if you want to keep two steps ahead of the sheeple out there.

I am worried about my financial future. Is anyone else nervous out there?

Interesting article. Thanks for link.

Regarding the hindsight (explain) vs. science (predict) dichotomy. Sometimes a good scientific theory is missing data to predict well.
In physics, this may be the result of difficult experiments. In finance, this can be the result of missing or untimely information flow.
In finance, the very information needed to predict is often that which is hard or expensive to obtain, through no coincidence: prediction has economic value.
As for physics, well, I wish I knew what the string theorist are talking about for decades (do they?)...

Have you ready any of Sornette's work? He uses similar theory but has models to solve for the "finite time singularity", i.e. crash date.