I'm sure everyone has been presented with the following logic: put in a 'stop-loss' at some arbitrary amount, say losing 1%. Then, your payoff distribution is tilted towards infinity, as shown above. It's like the idea of going to Vegas, and saying you will stop when you lose $500, so you think that you still have an equal chance of generating those +$500 and up numbers, and the bad outcomes are just truncated at -$500. Alas, it doesn't work like the graphs above. Instead, it generates the graph below, with a lot of probability mass at the stop-loss point: 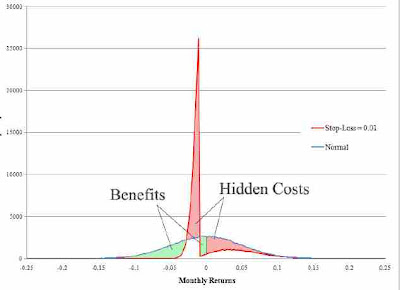 ive known this intuitively for some time now...in fact a stop-loss point is basically your exit price.

its nice to see that someone did the math on it, tho....

No summation of the 30 page article? Boooooooo!!! Hisssssss!!!!

Interesting paper. I had been wrestling with whether or not to use stops in a market neutral portfolio a few months ago. I ended up deciding to use wide (e.g., ~25%) trailing stops. Looking at the summary table on p.17 of this paper, maybe that wasn't a bad idea.

The distribution of the stock with stop loss looks a lot more like a lottery ticket than without. No wonder it's popular with the unsophisticated. Retail brokers love stop losses them because they generate a false sense of confidence/risk control while generating high portfolio turnover.

Not using price stops is an idea with traction among a certain brand of quanty directional trader. The problem is selling the idea to funds of funds/allocators. Career risk is the primary concern in the allocator universe and they're unlikely to adopt an idea that will land them in the gallows should things not go as planned.

I actually ran simulations on synthetic data at some point. Basically, in trending markets (underlying returns are either an AR(1) or a long-memory process) stop-losses are useful and generate superior returns compared to their absence. In mean-reverting markets they are a really bad idea.

professional poker players use stop-losses. it is common knowledge that they don't affect expectation directly, but they do achieve two ends:

i) protect you from 'tilt', or making -EV decisions when down a bunch of money;

ii) protect you from playing games you cannot beat, i.e., 'if i lose x, i will accept that as sufficient evidence that i cannot beat this game'

For an arbitrary stop loss I have no doubt this result is valid. However, for trading systems, a stop loss usually improves results. This is validated by backtest. In particular, my bread-and-butter daytrading system shorts momentum. For this system a stop loss is a necessity since momentum darlings can be run up without limit.

This is kind of obvious, but nice to see validated.

If I were going to set a "stop" it would be a "stop gain" not a "stop loss." I guess I am crazy, since my strategy is: determine likely value for an asset - when it gets cheaper buy more, and when it gets more expensive sell some.

Here is the part I don't get: let's say you set a stop loss. What is your rule for when you can buy back into that asset? Never? 1 year? When it goes back above where you bought it the first time? Without this definition it's hard for me to take results very seriously.

How is it even possible to genuinely evaluate the benefits of using stops versus, say, some other risk control method, without taking the trading methodology into context?

Saying "stops are good" or "stops are bad" is meaningless, except perhaps in the context of random entry.

Thus the point may be empirically proven that "You don't get a free lunch with random entry and a tight stop," but so what. Who actually enters markets randomly?

Last but not least, the point of cutting off the left side of the distribution imho is NOT to buy a free lunch in terms of open-ended gain possibilities, but rather to eliminate the roster of worst outcomes from a probability perspective. To wit, if you always use stops, you will never hold an Enron or a Lehman to zero. Stops, or in fact any risk control methodology, are a way of controlling average risk per trade in normalized terms and should be thought of accordingly.

@anon 11:47am:
I was a pro poker player for nine years. You are correct on both i) and ii).
With regard to investing/trading in stocks, i) is quite important.
The stop/loss is posited as a behavioral (self-regulatory) device for humans. It's not intended as a risk-management tool to be implemented via computer algorithm. The academic paper assumes that the stop-loss is a single decision. But it cannot be isolated- it affects decisions on *other* holdings in the portfolio of an all-too-human trader/player who is on "tilt".

Would Lehman and Bear still be around today if they'd used stop losses? I think they would! If you assume no positive expectancy, then these results are not surprising. If you do have a positive expectancy, then a stop loss is a small price to pay for the big winners. The defeatism on this blog is always so comical - why bother with the complicated mathematics to justify mediocrity? I suppose Paul Tudor Jones and the other Commodity Corpers were a statistical fluke.

Stop-loss is not of much use in case of normally distributed returns. This is clearly demonstrated in the article. However, many financial series have fat-tails, where a trader would have a hard time controlling his greed and fear emotions. Not to mention the (highly improbable) event of a single loss wiping out your account.
There is one thing that stops do quite well and that is to keep all outcomes in a statistically relevant zone. Otherwise, in case of a fat- tail event one would be unable to make a statistically driven decision.