Some Myths are Better than Others 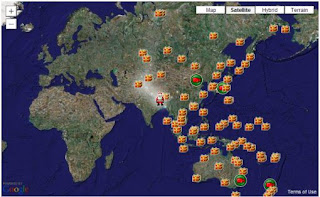 Norad tracks Santa. With about 2 billion Christians, say 1B independent households, and given Santa has a day to deliver gifts, that's only 86 microseconds per house. Given he tends to leave half eaten carrots (from the reindeer) and cookies, I imagine this speed would actually incinerate most homes. Nevertheless, I love Christmas--the songs, decorations, stories, meals, gift-giving--and my kids do too.

John Cochrane wrote, the CAPM “proved stunningly successful in a quarter century of empirical work,” meaning it seemed to explain the data pretty well, until we found out this was merely due to beta picking up the size effect, which itself was mainly measurement errors.

This longing for a prior sense of ignorance, when a popular theory appeared to be working, is a rather bizarre stance for an economist. It’s like saying how fun Christmas was when we believed in Santa Claus. True, but that’s harmless fun, not science. The CAPM was never a benign conspiracy of professors to create joy in MBAs, but a serious hypothesis about the way the world works. In a similar vein, Paul Samuelson stated about Karl Marx in his 1995 edition of Economics, after the fall of the Berlin Wall reduced the allocation of his text on Marxism to a footnote: “Marx was wrong about many things—notably the superiority of socialism as an economic system—but that does not diminish his stature as an important economist.”

Ah, the “being wrong” part—never mind!—Marx was popular and inspirational. Clearly, economists see theories in context larger than falsifiable predictions. Any idea that generates a large literature, supposedly, is good. The thought that an idea was edifying, even if wrong, is comforting to academics who often investigate unproven ideas. I disagree. There are an infinite number of bad ideas, so eliminating many of them puts hardly a dent in the shelf from which they are drawn. This is especially true when an error merely postpones an inevitable education with reality, like saying drinking and driving was a great idea until I hit a school bus. The fact that economists as preeminent as Cochrane and Samuelson adopt the same stance toward what constitutes a successful theory (ephemeral popularity among scientists), highlights the strange power of any idea that spawns a large literature.
Posted by Eric Falkenstein at 1:28 PM

I think you are unfairly discounting the discourse created and the value of wrong ideas. Mistakes are not necessarily pointless, they are just part of the path to progress and Marx's writings are not just pointless because he was wrong, reading them helps people of the present understand the thought process of the past. This post seems like an unfair write-off to the history of economic thought and seems to ignore that bad / incorrect theories or ideas still have value as building blocks or as things we now know don't work.

What I think makes Marx an important economist is not so much his economic theories, as his application of economic thinking to historical events. While a lot of his analysis was wrong, he nevertheless deserves credit for popularising the idea that economic forces could be an important engine of historical change.

Similarly the CAPM was important. The idea that only systematic risk should be priced is crucial even if not followed. The low beta effect Eric loves is exciting precisely because we feel we are getting something we should not be getting. If not for the CAPM, why is this true?

Eric, you vary between brilliant, and Taleb-esqe "everyone else is stupid type ranting." When you ridicule someone or something, pause to ask "what would Nassim do?" Then do not...

Could you provide a bit of background on CAPM? I have a rudimentary understanding of it, but I'm more curious regarding its acceptance.

You take it for granted that CAPM's relevance has gone by the wayside. I assume that there are still proponents of CAPM who would strongly disagree.

Could you concisely summarize their arguments and explain why you reject them?

Jay: the CAPM is the theory about how assets are priced. Why is an asset, something not like a ham sandwich, worth X and not 1.5*X? The CAPM (Capital Asset Pricing Model) tells you why. It's what they teach all MBAs, and take a semester, so check out wikipedia...it's not a sentence. But it's pretty simple once you know it. And, it doesn't work at all.

Actually, I think this is exactly right. I have heard the argument multiple times from people working in various social sciences that Popper is obsolete. However, I've never heard a good explanation about what is supposed to replace his description of how scientific progress is achieved.

I've started to think that the rejection of falsifiability as the criteria for which propositions do and do not properly deserve scientific scrutiny is a deliberate attempt to dilute science - to lower standards so that it is easier to claim that one's work is significant.

Marx is significant because, as you suggest, those who took his advice hit a school bus. Outside of sub-Saharan Africa the socio-political tragedies of the 20th century are clearly the Soviet Union and the People's Republic of China.