In the 1990's many Japanese banks were known as zombie banks because while technically insolvent, they continued to operate because their ability to repay their debts is shored up by implicit or explicit government credit support. The banks did not write down their loans, but neither did they lend much because they were in a holding period until the asset pricing fairy pulled prices back up to their pre-bubble peak. A decade of stagnation followed.

Luckily, Americans are too stupid to do that again. Instead, we have the FHA, a government agency staffed by many talented economists who I'm sure could prove to you their policy is optimal (under certain assumptions), highlighting the benefits of a rigorous education in the dismal science. Currently the FHA is dominating the lower-than-average house mortgage market. It offers lenient terms for home buyers than any profit-oriented banker, all in the name of stimulus, such as only a 3.5% vs. 10% down payment, and debt-payment/income ratios of 60% vs 36%.

Why FHA's contrary lending stance is a bad idea is because it takes a certain level of financial capital, and the correlated amount of prudence, to maintain a house, to make sense as the residual claimant on the property, to be the owner. There's a large probability a furnace will break, and then what? For a $150k house, if you could only afford the 3.5% down payment, there's a smaller chance you can maintain the house due to normal wear-and tear, as well as those big expenses like a blown furnace. Then, when the deteriorated house makes it clear the transaction is not easy money, the homeowner bolts and the property sits for 18 months attracting squatters, drug users, and vandals, which depresses neighborhood values (this is due to laws designed to protect the homeowner, who presumably is being bullied by the bank).

The following pie charts show the growth in FHA as a percent of total mortgage loans in the Minneapolis-St.Paul metro area since 2005 (data from here). For houses under $400k, they really dominate according to people I know in the business, but I wasn't able to get it broken out that way. In fact, I couldn't get much data from the FHA in general, as if they know what they are doing is dumb. FHA is the red slice of the pie. 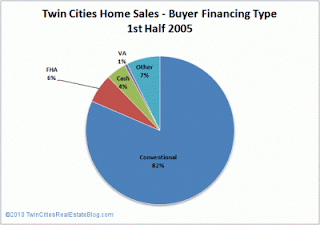 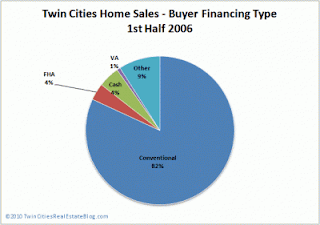 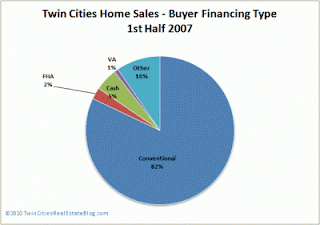 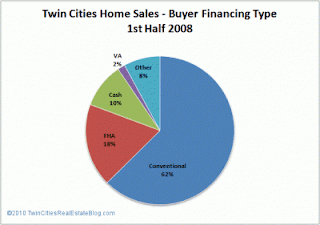 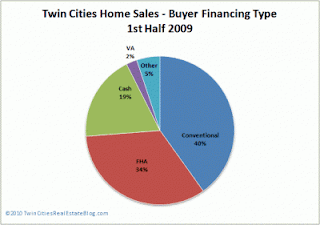 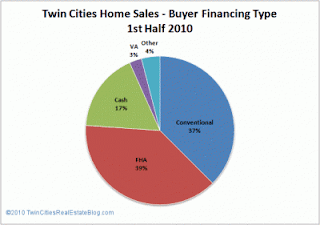 Posted by Eric Falkenstein at 7:27 PM

"the homeowner bolts and the property sits for 18 months attracting squatters, drug users, and vandals, which depresses neighborhood values (this is due to laws designed to protect the homeowner, who presumably is being bullied by the bank). "
What often happens is the homeowner fixes the furnace, or whatever, instead of paying the mortgage for one or two months thinking that s/he will be able to start paying the mortgage again later. However, depending on the servicer and the state, the homeowner may have to pay the entire arrears plus a fine in order to start paying the normal mortgage payment again. Sometimes s/he will send in the regular mortgage payment after missing payments, only to have it returned, uncashed. Once the bank stops accepting money, it is true that some homeowners become afraid, and believe the sheriff will come to their homes with guns and dogs immediately and subsequently "bolt," however, just as many stay in the home for those 18 months.
The point is, it is obviously much better for neighborhoods when homeowners in default know that they can stay in their houses, and should, for about a year if they live in a judicial foreclosure state. (I do not know anything about how former homeowners are evicted in non-judicial foreclosure states.)

The other day on your mimicry thread you said we shouldn't expect a bubble in subprime housing again anytime soon. Would you like to retract that statement?

the mimics won't bubble this, it will just be a government sink-hole, like the US auto industry. No one is funding private firms to do what the FHA is doing.

Can't they just mint enough of their own money to keep a bubble inflated though? It's not the same process as happened before, but it may not need to be.