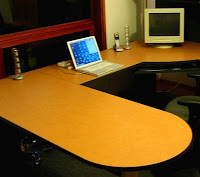 It's easy to clean a desk. Just wipe everything off the top and shove it in a drawer. But a truly clean desk is not merely organized on top, but below, where we can not see. Unfortunately, people forget to look deeper when looking at other metrics like employment. Presumably, if the government hires people that counts just as much as if private company does in our employment data. Indeed, for decades economists thought that one big advantage of the socialist economies was they were always using all their workforce, whereas the capitalist economies often suffered from inadequate aggregate demand and so operated at less than full employment. Yet it makes a big difference what a government worker actually does, as while many add value most do not, and they get paid either way.

I know someone who works for a small bank of about 10 people, and he was telling me about once a year, about 6 people from the FDIC come in for a week and go over their books. He says they work always with an eye on the clock, and if you are talking to them at 11:30, you can expect them to leave mid-sentence because they take breaks, show up and leave like union regulars. Of course, they don't highlight anything useful to the bankers, or society, in their annual exercise (remember, pre 2007 regulators were mainly critical that banks lent too little to historically underserved homeowners).

I know people who have jumped from industry to regulators and I don't see this as sustainable. These regulators are truly a zero, if not negative. Do you remember CAMEL ratings on banks? That was a way, after the Savings & Loan crisis of the 1980's, that regulators would identify troubled banks. It has always been a complete waste of everyone's time.

Washington D.C. has one of he lowest unemployment rates in the country. It is hiring a lot of people, many quite talented, and paying them well. It is also turning them into part of the overhead of this country without getting anything in return other than 'Keynesian stimulus'. Further, these people know their jobs aren't about producing anything useful. As the joke about faculty politics implies, people become mean and petty when the stakes are low. That makes for a stressful environment, because nothing causes more stress than working day in and day out at a place where nothing you do matters.
Posted by Eric Falkenstein at 8:23 AM

Dick Armey, I think, relayed that joke when he left Congress to go back to academia, but I don't know if it's quite true. Consider some of those leaked e-mails by the JournoList folks, many of whom were in influential positions, and were dealing with a high stakes event (a presidential campaign). High stakes, but still lots of nastiness.

I ascend entirely. I spoke with a friend who works for a Federal Reserve Bank (in their IT department) and he detailed how he had built a spreadsheet to track the percentage of time he actually spent working in the average day, as opposed to reading sports blogs and other such value-added activities. He came up with a sub 10% figure over a six month time-frame.

This is a smart, technically inclined individual with an impressive academic background. He is also in the top 20% of income earners in this country, I would note. What a waste.

He claims the "stability" is all he was seeking out of a job. So he has that going for him, which is nice.

Sure enough Mr. Banker Man, cause when you think of socially productive activity over the past decade, you sure think of the financial sector. Really moving the country forward you are.

these people know their jobs aren't about producing anything useful.

Maybe, but it would be corrosive for their self-esteem to aknowledge that they are a handicap for the people who actually works. So they convince themselves that they are charged with a vital and responsible mission. So they demand a respectful attitude appropriate to their important rank and power, investment of much timeconsuming attention and symbolic "begging" from simple "civilians". Hebrew even has a special verbal mode to be used when "petitioning" a bureaucrat.

This is funny, criticising "....these people (who)know their jobs aren't about producing anything useful." As opposed to those incredibly useful bankers... they've added a lot of value over the years

I have to say I agree totally with you despite being a career bank regulator for the government. I managed the oversight of the systemic and large banks until mid-way through the crisis. I provided warning after warning to supervisors about events leading to the crisis before it occurred but sadly was ignored by managers too afraid to act on the information.

I attempted to blow the whistle on our own failures to regulate the "too big to fail" banks. I was stripped of all essential duties by a senior examiner whose work I criticized. Senior management has ignored all warnings and complaints so as not to acknowledge how much of the "crisis is of our own design." Meanwhile those at the helm get all the public accolades because they put on a good front.

Sadly, there will continue to be bureaucratic cover-ups as long as there is no protection by way of a federal whistleblower act to protect govt agency workers blowing the whistle. We need some legal protection for those on the front lines if we hope for a better government.

I once talked to a man who worked for a federal agency that audited FDIC-insured private banks (maybe the FDIC agency itself). He said his main job was to find fraud on the books. He said that in over a third of their audits, he and his team found discrepancies, usually of a fraudulent nature. Usually not very large sums, but not pennies either, with the fraud most often traceable to one person acting alone or acting with one other accomplice. I told him I observed most people in life to be honest, and I was surprised that fraud was so commonly found in his audits. He replied that many basically law-abiding people are temptable in a sitution where a lot of money is in front of them and they think they can get away with taking a bit of it.

I conclude that it is a necessity to externally audit a bank's books extensively and rigorously.

parviziy: that's interesting. My mom worked for the IRS, and much of what she did investigated stupid people who blatantly lied or didn't pay their taxes. So, I know it happens. But, I'm skeptical that regulators catch such malfeasance at high rates. Maybe, but I'm skeptical.

Dr. Falkenstein, you are absolutely right to be skeptical. I am a career bank regulator and can tell you firsthand how regulators share the blame for not taking action to stem the financial crisis much sooner. Supervisors simply dropped the ball when provided ample warnings of the crisis. Managers simply took the path of least resistance and did not want to subject themselves to being second-guessed by those higher up on the totem pole. Much the same way that compliance and Risk Officers were over-run at the large banks by other officers afraid that bad news would "screw the pooch" by eliminating hefty bonuses.

Currently, there is only very limited protection for whistleblowers within the government to protect federal employees. In fact, nothing at all to protect federal employees who must act on disclosures as part of their assigned duties within the government. The history of financial meltdowns repeatedly demonstrates that an abdication of federal regulatory duties was a major factor allowing indefensible industry practices to accumulate and fester until there was a disaster.

Existing corporate whistleblower rights secure a channel for the flow of evidence when laws and reforms are violated. But this leads to continued bureaucratic cover-ups, since there is no protection for those on the front lines of using the evidence to enforce the law.

After the 2006 presidential election, a Democracy Corps survey of swing voters found that stronger rights for government whistleblowers was their second highest priority at 79%, second only to ending illegal government spending.

This is because whistleblowers are the single most effective resource that exists against fraud. After the False Claims Act enfranchised whistleblowers, annual Justice Dept recoveries of civil fraud increased from $25 million in the best years, to an average of nearly one billion dollars annually. A Price Waterhouse global service of organizations found that whistleblower disclosures led to detection of more fraud than auditors, compliance and law enforcement safeguards combined.

We have found the same thing at our bank regulatory agency: it is tips from whistleblowers where nearly every major finding has come from regarding malfeasance and laws being violated at banks. It is very seldom ever disclosed by bank examiners themselves. Examiners, however, are able to follow-up on tips during examinations. Conveniently, senior officials of regualtory agencies never want the public to know this.

The difference is that if you are unproductive and in the private sector you are much more likely to be rooted out, usually by the market. It may take a while but it will happen.