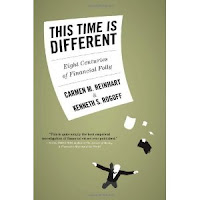 The book This Time is Different" is a very important book, as it documents the facts about various financial crises, and enumerates many classes of crises. Facts are very important, and the fact to opinion ratio in this past crisis reach lameness a long time ago. Unfortunately, it is a very incomplete book because it does not attempt to find the default rate of countries. As if I said that there were 7 homicides in city X last year. A good question would be, 'how many people live in town X?', because we really want to know the rate, not the number.

The plural of anecdote may not be data, but looking at the events like financial crises, it's really all we have, so the book is useful. For example they note that many times, a great optimism precedes a default, as when Argentina was a star in 1998, but then defaulted in 2001. Eyeballing their data, I would say the default rate on sovereign debt is about 3% annually, about that on BB- debt, but that's a guess.

There are a lot of footnotes, which is helpful to whoever writes the more definitive survey. They quizzically note that while credit card issuers want to do the performance of their consumers, countries make it very difficult to ascertain their own default rate. That is because countries tend to have a lot of market power. It seems probable that most countries are much riskier than they claim.

The US states did not default in consequence of the Panic of 1819, and many foreign investors then thought they were risk free, yet in the recession of 1839-43, many states did default. And so it goes. California and New York have never defaulted, but I don't think their track record is a sufficient statistic of their default risk. Looking at the broad scope of history is needed to see this.

The authors suggests that 'countries may need to borrow to fight recessions or engage in highly productive infrastructure projects' (p. 55). I'm rather skeptical. The fact that countries get shut off seems to me a good thing. I don't see that countries with large capital deficits are strengthened, but in fact, it is symptomatic of weakness. The best thing a drug addict needs is less support. It makes me think that on average, international capital flows might merely allocate money to waste.

One prominent datapoint is that on average, real government debt rises by 86% three years following a banking crisis (p. 142, p. 170, p. 224, p. 231, p. 238). This is repeated so often, it should be on the cover. It highlights that banking crises generate real effects, because that's a lot of debt.

A highlight of how lame economics is as a science, is reflected in chapter 13, which tries to explain the most recent financial crisis. It fails miserably. Figure 13.4 shows the behavior of the US in 2008 compared to the most comparable crises. It's a rather weak comparison, and it's the best he can muster, meaning, it isn't very comparable to the past. Rogoff has done a lot of sophisticated analysis, but at the end of the day, he presents simple averages that show a very weak pattern, highlighting that you can't get blood out of stone. It would be nice if there were so much data we could just apply these off-the-shelf algorithms and see important results, but we can't. That is, macro-economic data are too few and non-stationary, to be amenable to the powerful logical techniques economists spend most of their time building.
Posted by Eric Falkenstein at 9:09 PM