Heidegger is no Paradox 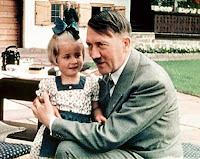 Martin Heidegger is one the twentieth century's most important philosophers. His Sein und Zeit gets one thinking about what does it mean to be? Yet, in the end such musings remind me of Bertrand Russell's observation that "If any philosopher had been asked for a definition of infinity, he might have produced some unintelligible rigmarole, but he would certainly not have been able to give a definition that had any meaning at all."

Anyway, there's a neat BBC video on Martin Heidegger, which spends a lot of time on Heidegger's life, but little on his ideas. Most interestingly, they spend about half the time discussing the 'paradox' that he was also a virulent Nazi. How could someone so wise is the ways of philosophy be so wrong on something so important?

Simple. It's no paradox that Hitler was nice to dogs and children, that Noam Chomsky is a great linguist and an apologist for every anti-American illiberal regime, that Isaac Newton believed in Biblically inspired numerology, or that someone who is really good at a parochial models of economic interaction would support socialism. My beliefs are not shaken by the fact that someone really smart thinks the opposite on some political issue--what crackpot idea does not have someone really smart who believes it? People have multiple selves, in some contexts, agreeable and insightful, in others closed and clueless.

Most importantly, politics is the arena of ideas that are not 'decidable' in the sense that one can logically prove any currently popular idea is 'wrong', and smart people are good at logic, not prioritizing uncertain hypotheses. Over time wrong ideas, like communism, have their wrongness exposed via empirical contradictions, as when the Eastern Bloc was neither more prosperous or free than the West even though it was putatively for 'the people'. In 1950, most of the best economists thought socialism would economically dominate the perceived anarchy and inefficiency of market oriented economies.
Posted by Eric Falkenstein at 9:42 PM

I studied Heidegger and Husserl under Gian-Carlo Rota and he constantly emphasized your "multi-self" explanation, and not just for Heidegger. Being an undergraduate and touched by a mild idealism I had trouble accepting it in the beginning. Rota used to say, "No one wants to hear that Einstein beat his wife." It didn't matter to Rota, for the purposes of the example, that to the best of our knowledge Einstein did NOT beat his wife.

On the other hand, your Russell quote on infinity is puzzling. Perhaps it is hard to pin down "Being" but Cantor did a fine job of defining "infinity" or at least "infinite set".

That was Russell's point: mathematicians can define infinity, philosophers could not.

You've addressed the wrong objection. The point is that Heidegger lived into the 1970s, long after the atrocities of National Socialism had been revealed. He never apologized (and this I mean in either sense of the word) for his affiliation -- a damning silence.

Can people be forgiven for their mistakes? Of course. Heidegger never asked to be forgiven.

Chomsky still supports dictators of repressive regimes over the US. That doesn't invalidate his linguistic theory. I'm just arguing that someone can write a great book, have a great insight, even though they are primarily wrong on a bunch of other conspicuous issues.

FWIW, recent assessment suggests aesthetics rather than politics at the root. Worth considering, whether paradoxical or not, right or wrong, answers or questions.

"In 1950, most of the best economists thought socialism would economically dominate the perceived anarchy and inefficiency of market oriented economies"

looks to be fulfilled 60 years later (not socialism being better .. but market-oriented economies can be inefficient and can lead to anarchy)

Even great thinkers are influenced by their atmosphere. Social Darwinism was in vogue and selective breeding to improve the race seemed logical to those across the political spectrum. If IQ is more than half heritable it's still tempting. That Heidegger would have a flirtation with fascism is understandable. If he had flirted with communism which is very similar but even worse he would probably be celebrated on T-shirts like Che. Funny how I've never seen a lefty renounce communism. Ideas are very powerful and hard to let go. The best we can do is use our critical intelligence to train our brain to let go. I think Matthew Arnold called it the free flow of consciousness. To realize that the brain has modules that roll in and out of our mental wheelhouse. That our consciousness and reason are limited and that we live most of our life in an animal state. Sort of a metaconsciousness about our limitations that can realize that logic is ultimately self-referential and instead focuses on assessing and prioritizing the big ideas.

Not understanding what Hitler being nice to dogs, and smart people being Nazis, have to do with each other.

Hitler was filled with hate. Was Heidigger?

Never really knew much about Heidegger except the line from the Nazi song.
But now I've read a little bit about him and want to puke.
The man was a worm. Too bad he survived the war.

Great minds can think independently enough that they won't be swept up into a world that rationalizes hate and violence.

What about Dr. Josef Mengele, he professed to do what he did in the name of science. So a philosophy to promote humanity is fine, but experimenting on twins is not?
Maybe its not a exactly a fair comparison, but I would expect more from higher intellect then from a brute. And His silence was deafening.

To know what is right and not do it is the worst cowardice. Confucius

The line separating good and evil passes not through states, nor between political parties either - but right through every human heart. A. Solzhenitsyn