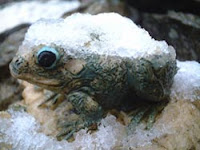 My kids are tough. Outside play is canceled at school only when the temperature is below zero (about -18C), and they don't whine about the weather nearly as much as I do. So I was reading about this woman in Duluth (western tip of Lake Superior), who fell in her yard and couldn't get up. She was found 4 hours later, with no heartbeat and a 70 degree (21 C) body temp. When she arrived at the emergency room, the doctor on call applied this, heretofore unknown northern aphorism:

But there's a saying in the emergency room, he said: "You're not dead until you're warm and dead."

There's some logic there, after all, many frogs simply freeze every winter, and thaw out in spring, avoiding the whole hibernation thing. So, after raising her temperature, they started her heart, and off she went to see her grandkids. "I'm a good old Norwegian" she noted.

I never thought about it like that, but there's something profound there. Maybe, instead of the cliche, 'he's down, but not out', one could say 'he's dead, but still cold', implying the same thing, but in a fresher way.
Posted by Eric Falkenstein at 9:11 AM

cryonics folks would love this

interesting. think i read on hanson's site cryonics is a hoax because the brain is damaged literally in minutes by oxygen deprivation (see terry schiavo). so this must have been a lucky case.

The brain is damaged in minutes by oxygen deprivation, but not if it's cold enough. So cryonics is possible, assuming that your cause of death is hypothermia.

Gary, when the brain gets cold enough, it does get terminally damaged - water does expand upon freezing, rupturing cells that contain it. The temperature/damage graph is U-shaped. Place a tomato in your freezer for proof ;) The way to counter that would be to dehydrate tissues prior to freezing, but human brains do not respond very well to that either.

should be "whine" not "wine"