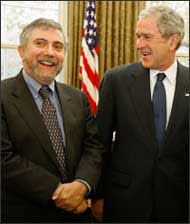 Paul Krugman won the Nobel prize, so he got to meet President Bush for a photo. Now, Krugman has been so highly critical of Bush, one wondered if he would behave. But he played nice, and let his wife regale Bush with tepid tales about how her parents hosted his father at a fundraiser back in the day.

Anyway, Tyler Cowen had a caption contest for their picture in light of this backdrop, and submitters offered their snarky hypotheticals. Krugman chose the following as his favorite:

“So then I said to Cheney, ‘Duh! Piecewise continuous functions are always Riemann integrable, so just invert the matrix and use a polynomial distributed lag to eliminate the heteroskedasticity!’ What a lightweight!”

Now, a person's sense of humor reveals a lot about both someone's logical intelligence, and their emotional intelligence. The lowest form of humor is both dumb and mean, like the traditional Polish joke where the punch line is all predicated on the fact that Polaks are stupid (eg, Q: How do you get a one-armed Polak out of a tree? A: Wave to him). But this joke is both dumb--Polish people are generally not stupid, Polish intellectuals include Copernicus, Banach, and Ulam--and mean, because they have basic punch line 'because they are stupid!' It is a good thing that they don't print ethnic joke books anymore (I had a dog-eared Polish/Italian joke book as a 9 year old).

Anyway, Krugman's favorite caption is basically a Polak joke: Bush's stupidity is the punch line. Bush's intellect is contrasted with the intellect involved in advanced mathematics, a contrast so vast it highlights that Bush's intelligence is the polar opposite of that involved in 'piecewise continuous functions'. Like snarking to an obstreperous fat guy, 'listen, skinny...' I doubt any of Krugman's liberal heroes understand the importance of the Riemann integral, or its extensions, the Riemann-Stieltjes integral, and finally the Lebesgue integral. But who cares? Anyone who really understands these concepts understands also they are so parochial as to not indicate much about one's intelligence other than that they had an aptitude and interest to take advanced calculus courses. I would bet JFK, LBJ, MLK, or FDR could not take the derivative of exp(x).

So, if that portion of the joke was overreach, the real punchline is merely emphasizing that Bush is dumb. That's so funny! It is a sign of Krugman's irrational partisanship that he thinks Bush's is dumb, and that this matters. For a politician, Bush's IQ is probably average, estimated around 124, higher than Kerry's or Gore's. This is below the average IQ at top-10 economics graduate programs by a standard deviation, but such is life--there's more to ability, effectiveness, and popularity than IQ. More importantly, it is not true that people who disagree with you are either stupid or liars. Most journalists and academics are Democrats to be sure, but so are most felons and the underclass--do we split the difference?

Even if true, if Bush were stupid, would that be funny? I don't think such humor indicates good character. Intellectual inferiority is a fact, but it is pathetic, worthy of sympathy not ridicule. A leader of a large group is usually of above average intelligence, but not too much so, and so the logic of one's side is not merely an IQ test between their two putative representatives. On any big issue--abortion, evolution, God, taxes, welfare, affirmative action--there are smart, honest, people on both sides. Some sides may be wrong, but neither side is intellectually indefensible, which is why we can't teach wisdom.

Leaders are articulators, consensus builders, ingratiators, and thus Mark Schmitt works as a speechwriter for the much less intelligent Bill Bradley, as George Will worked for Reagan, and Frum worked for Bush. The front-men for any political side is rarely a genius, but that is the nature of leaders--they have other skills.

Thus, Krugman probably believes that those who agree with him are smart, and thus can effectively implement his plans for extensive top-down spending. In this sense, he is consistent, if ultimately clueless Nobel Prize winning economist.
Posted by Eric Falkenstein at 7:49 PM

You seem to be reading a lot into it. Maybe he just likes the caption because it's so improbable. Or maybe it's a joke at his own expense: the character in the caption can only talk or joke about math because that's all he knows.

I also don't agree with your analysis of the joke. To me the humor is not that Bush is stupid, it's the idea that an egghead professor would set up such an obviously ridiculous standard for deciding someone is smart, i.e. that they have detailed technical knowledge of the professor's field. I think the humor is playing off the idea that Krugman (with his Nobel prize) is such an egghead professor.

dumb or not, it was funny. and i'd like to read a post where you argue intelligently pro god and against evolution. THAT would be fun.

i concur with the other commenters, sameer in particular. you make some reasonable points, but your sense of humor deserted you here and you malign pk unfairly.

I think some of the commenters are interpreting the caption as being spoken by Krugman (that's how I read it at first too). But in reality it's meant to be interpreted as spoken by Bush - I think - which makes it essentially a Polak joke.

Still, maybe it's just a reflection of where I am on the political spectrum, but after eight years I think we're all entitled to a few Polak jokes at Bush's expense.

But what the picture most reminds me of is the SNL skit where Bush is endorsing McCain in the Oval Office and McCain is doing his best to distance himself in any way.

I don't see this as a self-deprecating joke, because attributed to Krugman it isn't funny in any way.

Jeez falkenstein, take a joke. Krugman was funny. OTOH the clown standing next to him turned this once great country and mighty economy into a joke. well that's just not funny.

The real humor here is how much of a stretch you had to make to go after Krugman. You obviously have no prayer of managing to do so on any substantive terms!

Not to mention, you're of course dead wrong. No one would misconstrue this as Bush being dumb (though he certainly is). Rather, it's the contrast of someone unknowledgable in an area being forced to have a conversation with an expert, and would work in any such context. You could substitute Hillary Clinton for Bush in that picture and the joke would work the same.

The most amusing thing of all is how much you hate Krugman! And the lengths you have to go to think yourself getting a punch in on him. :)