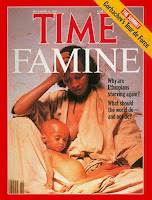 In contrast, 1984 - 1985 famine in Ethiopia was the cause for the single "Do They Know it's Christmas", and much international concern. But population growth clipped along at a 2.8 percent for the the 1980-1985 period, greater than it was in the 1970's. It's now over 3%. And there's always talk about some new famine in Ethiopia (the magazine cover above is from 2000).

Poverty relief is based on the idea that you give someone something, they will pull themselves out of their current circumstances and become self-reliant. Instead, it appears it just increases the numbers of those who can't support themselves. Rephrasing Bagehot, one of the most melancholy of human reflections is that charity does more harm than good.
Posted by Eric Falkenstein at 3:48 PM

International help - it works. it is effective. If ever there was a need for demonstration, this is it. Any one can see that the dollar donated to famine relief in Africa does make a difference.

A larger effort is required. Today and tomorrow, because "the poor will always be with you".

There's not always famine in Ethiopia, although there's always a good chance of it...

How much of that was immigration? There's much more Irish blood overseas than in Ireland. The # of people descended from the Irish in the US, Canada, and Australia is remarkable considering the population of Ireland. Maybe even more in England.