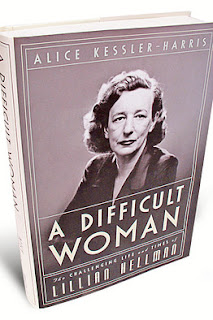 A review of a Lillian Hellman biography, a popular author who like most mid century intellectuals was enchanted by communism:

Ms. Kessler-Harris's defense of Hellman and others who refused to abjure Stalinism will sound familiar. While some party apparatchiks were "vaguely aware in the 1930s of Stalin's increasingly ruthless methods"—a rather limp way of describing a roiling genocide—one must remember that "this was, after all, a period when rumors flew." Soviet enthusiasts like Hellman, Ms. Kessler-Harris writes, were merely showing a commitment to "social justice" and not Stalinism per se. The Communist Party plumped for the noble goals of racial equality and a vaguely defined "peace," leading Ms. Kessler-Harris to ask: "How could [Hellman] not have joined?"

People confabulate all the time, myself included, but many people consciously confabulate and excuse lies, and this is quite different. Usually this happens when they see a greater good, as illustrated not merely by Hellman's life, but by her sympathetic biographer. Note that Ezra Pound and Martin Heidegger are generally consider morally bankrupt for embracing fascism, which to me isn't worse than whatever you want to call what Stalin and Mao were doing. White lies have their place, but not for big intellectual debates like the viability of socialism.
Posted by Eric Falkenstein at 9:36 AM

Just one more of Willi Muenzenberg's dupes was she. Too bad so few know his story which is fascinatingly told by Stephen Koch, in
Double Lives.

I think the author has a point. The communist doctrine does have a much broader appeal than the fascist one, and that's probably why the damage it caused was so large. Hating the rich is somehow more "noble" than hating entire nations that threaten the greatness of your own. Maybe it's a much smarter way to appeal to Haidt's moral foundations. I used to get communist education every day in school - sounded all very humane, always preaching compassion for the weak, righteous anger against the greedy capitalist bullies who oppress the helpless workers - all reasonably supported by historic facts and common sense. Also a lot of talk about world peace, appeals to friendliness towards all races etc. To me it is understandable, and to some degree excusable, that so many people fell for it, and continue to do now. It's hard to see that a greedy entrepreneur contributes more to society than a selfless charity worker. And all the atrocities can be easily dismissed as accidents unrelated to the doctrine that were never supposed to happen.

The system can never work, and will bring more misery to the people it claims to protect, but it's hard to see that such outcome is inevitable. Economic collapse can also be dismissed as something not supposed to have happened, sabotage by the west or personal faults of the leaders themselves. But it's not so easy to excuse somebody who believed "inferior" races should be exterminated or enslaved for their own good.

Holocaust survivor Raphael Lemkin coined the term “genocide” and was instrumental in having it officially recognized as a crime against humanity etc.

However, thanks to Soviet and Leftist pressure the official, 1948 UN definition left out “political” as determining factor (the others being: ethnic, religious, national, racial). Although this may seem like a plausible exemption in some contexts it allowed Russia, just a few years ago, to get off the hook for the Ukrainian genocide of ’32-’33 via the argument that “Ukrainians were killed because they were farmers”, not “farmers were killed because they were Ukrainians”. Cold comfort indeed.

Generally the socialists get away with more wrong-doing because, like the tax code, their doctrine is so dense, endlessly detailed and ever-changing that they are better able to lawyer public opinion into a corner. When have you ever heard/seen the term “LEFT-wing death squad?”

In reply to a private comment, I think this doesn't center on intentions at all. There are few cynical opportunists, even fewer sadists, more often just ideologues and moralists. I would bet most Nazis and Communists had good intentions, they just saw certain race or class exterminations as a means to an end. Presumably the commies had better intentions but this is only because we currently see class extermination not as bad as racial extermination. In contrast, I say the extermination of the Ukranians was comparable to the extermination of the Jews. In both the true believers with good intentions thought the means justified the ends, or could be justified via some cognitive dissonance under 'breaking eggs to make omelettes' type of analogies that Hellman and others engaged in (she was against intentionally starving Ukranians though also tended to not mention or minimize this event).

It's the blatant, intentional ignorance for less obvious genocides like gulags and famines, and sending people into the front line of battle without guns that I find evil, because these are cases where one truly knows better, but hopes the white lie is worth it as a tactical sacrifice. These are not white lies, but a descent into aiding and abetting monsters.

there is a difference between stepping in sh-t and swimming in it. Heidegger destroyed the lives of real people that he knew.

So did many of the communist dupes, Josh. The differences between Hemingway and Dos Passos in the Spanish Civil War being a case in point. Hemingway celebrated the murder of a friend of theirs, Jose Robles at that time, while Dos Passos drove another man who was almost certain to be murdered to safety in France in his own car at risk to his own life.

Prior to this Dos Passos had been at least as celebrated as Hemingway or Scott Fitzgerald. Afterward he almost disappeared from the public's consciousness.

Timothy Snyder addressed the question of who killed more in a NY Review of Books article last year: "Hitler versus Stalin: Who Killed More?".

@Patrick, the comment was about the moral culpability of Lillian Hellman vs. Martin Heidegger, as that was the comparison being made in the post. I see now that Eric had a a later comment that led you to misinterpret my point. I don't care about comparing communists to nazis... stupidity leads to more suffering than malice, so I wouldn't be surprised if communists come out worse in an exhaustive comparison.

There is a broad tendency to equate 20th century communism and fascism. I think that is imprecise. While there is little or no moral distinction between Stalinism and Nazism, there is a considerable moral difference between Stalinism and fascism. The European left seeks to conflate these isms so as to discredit Mussolini, Franco and Salazar. There is just no comparison between the mass murders of Stalin and Hitler with the authoritarianism of the fascists. I dare say that if one had an accurate accounting of murders, the fascists would be a rounding era on the mass murderers. It is therefore galling to see American stalinists such as Hellman being excused, while the entire world has condemns fascism. The fascists were dictators, but not totalitarian and not blood-thirsty.